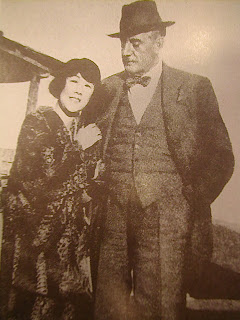 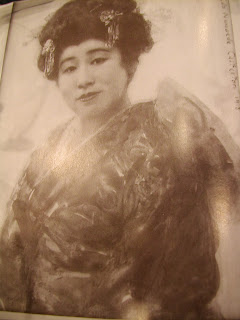 I didn't like Madame Butterfly before, but I understand now how exquisite her performance must have been.  She knew the pain of love and Meiji women.

As a typical of the Meiji era, she was pressured to marriage.  Her father pushed a military doctor for her husband and told her if she married him she could continue her music activities.  So, she married him without falling in love.

Her role as an music educator and performer prospered, so she wasn't a dedicated wife to her husband as ordinary wives were then.  So, one day her husband gave her ultimatum that he was assigned to the Sendai unit, northeast, and wanted her to go with him.  That meant death to her because the only music school was in Tokyo where she taught and learned.

She explained to her husband that her passion and mission of her musical career was not only for her personal purpose but for elevating Japan's culture before the world.  He understood and they divorced. Probably because of it, she wrote, what we refer to today, feminist essays.  I've read only a bit, but I could see her deep personal thought on women and our choice or no choice.

In the essay I read, she often used the word, dignity.  It conveys her utmost feeling of the time while the journalists then were scandalizing her for every move she made. 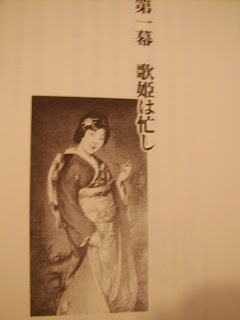 Sometime after her divorce, a Tokyo University medical student and distant relative of her appeared and proposed her.  He understood her passion and mission.  He suggested that he would take a post in Singapore which would give him quite large sum of money after one year of service which would enable them to travel to Germany and both to study there for three or four years.

They married against many oppositions including her father.  He traveled to Singapore, and in secret, she traveled to see him after six months.  Upon his return to Japan, it took more years for them to realize their dream, but they did travel to Berlin at last in 1914.

But the political situation made them leave  Germany not long after their arrival, and they moved to England.  In London, He went to study medicine, and she stayed home.  She wrote to Sir Henry Wood three times, and got an audition.

I'm just writing like this, but you understand how tenacious she was.  She learned some German in two month voyage from Yokohama to Berlin from her husband, and she was in London not too long.  So, she couldn't speak English yet.  Anyway, the most famous conductor in London then was impressed with her voice and performance.  She got a part right away to sing in front of high society people, and then at huge Albert Hall.  She made a success out of all her performances.

The Meiji women were oppressed, no doubt about it.  Her mother divorced her husband eventually also.  He made many troubles related women which was typical things for men then.  Women had no choice.  After her divorce, her mother was living alone, and later, Tamaki invited her to live with her.

Mother made all Tamaki's kimono, so Mother was accomplished kimono maker.  Many women made their own kimono, but I'm sure not many could cut most expensive silk with design that must match exactly.  Mother also let her daughter go so that Tamaki could pursue her dream in Berlin.  So, when Tamaki sang Madame Butterfly, her thought of self-sacrificed Meiji women like her mother, her own experiences of failed and successful love, and every emotion came together.

Tamaki also met an accomplished Japanese dancer in Paris, and she helped Tamaki choreograph her movements to show deep emotions.

After London, Tamaki and her husband went to New York.  Then, he went to Yale University to continue his study.  She signed a contract with Chicago Opera Company as a Metropolitan singer with help of Japan's consulate and a man from Metropolitan.  She sang in Washington DC, Boston, Saint Louis, Indianapolis, South America, and from May 27th 1918, she sang at Metropolitan in NY.  Enrico Caruso played her opposite.

She played Madame Butterfly 2000 times in the US, Europe, Brazil, Argentina, Russia, and many countries.  In the U.S., she sang before President Wilson, Harding, and Coolidge.  After 20 years in overseas, she returned to Japan and continued her career as the war escalated.

Her second husband returned to Japan earlier and received his PhD on his vitamin C research, but he died wishing to be with her.  She had contractual obligations, so she could not be with him.  Her mother survived until she returned to Japan, but later died.

From "Miura Tamaki  Madame Butterfly Forever" written by  Takahashi Iwao
Posted by keiko amano at 6:44 AM

Her first Opera performance was Orpheus in 1903.

I can't imagine playing something 2,000 times. The history is fascinating. I've never experienced Madame Butterfly in any way, but have always been curious. Thanks for sharing the story and the YouTube.

After reading her biography book, I also read her memoir in which the editor wrote that she included her individual recitals to the total number, not just opera performances. Of course, opera performances are much more demanding.

Also, the editor who was also a music related professional wrote that to be fair, her voice was not as broad range as the world class soprano. Her voice training was pretty much on her own way although she did have some professional lessons. Nevertheless, her contribution to Japan's opera and letting the world know about Japan was remarkable.

Additional correction I have to make is that I wrote Puccini came to see her perform with his wife. I misunderstood. I think he went without her. I'm unsure, but I doubt that his wife probably had no interest in opera. Anyway, she visited his house near a lake and I think his very young wife cooked dinner and welcomed her.

Puccini's life wasn't ordinary. It seems none of his family members truly appreciated his art.

Thank you for your comment. This was a good opportunity for me to add my correction and more comment.

Thank you for taking the time to write this post. I have linked your post to aa article we just posted if that is ok with you?

Here is the link to the article.

Yes, please be my guest. You have a great post

Hi Keiko,
I am producing a video documentary film of an elderly relative of mine whose father-in-law was the publisher of a Japanese English newspaper from 1915 until his death in 1950. I am listening to the section in the video recording where my interview subject mentions that her father-in-law personally financed Miura Tamaki's musical performance at the Los Angeles Philharmonic Auditorium prior to World War II, years before she returned to Japan to spend the rest of her life. I suspect that the famous singer performed selections from Madame Butterfly at the Philharmonic, but I don't know for sure.

I wish I could see her on youtube. I think my mother saw her sing. Her memoir was very interesting. Have you read it? It might not have a translation. Many Japanese books are not translated.