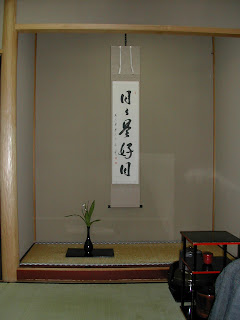 “Each day is another good day.” 「日々是好日」

日々is short of 日日 in Japanese. So, the first, second, and fifth characters are日. It means day or the sun. 是 is “is” or “thus.” 好 means “good.”

The scroll in a tea room is the most important ocha utensil. It can be the theme of the invitation. When we are invited to an ocha party and enter a tea room, we step over to the front of the scroll and sit down. We look at the scroll as well as its frame and the flowers and the vase, and enjoy and appreciate the arts and the hospitality of the host. I grew up in this kind of environment, so, when I happen to be in such a scene even if it isn’t a formal ocha party, I still go up and pay respect to the scroll and other arts in the tokonoma alcove and converse with the owner of the arts. 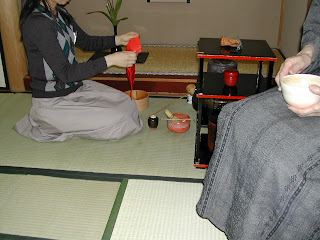 First we finish eating our sweets at the waiting room. Each member draws a bamboo chip from a paper pouch. The member who receives the chip with the moon in the back gets to perform first, and the member with the flower chip goes next.

Someone said, “The moon.” I flipped my chip and looked at the black ink drawing of a cherry blossom. Sawanaka Sensei looked at me and said, “Who received the flower?” “Flower!” I said. I’ve seen different Kagetsu played before, but this was my first participation.

I had no confident to join this Kagetsu. But the Sensei insisted that I went ahead and just tried it. She said, “You’ll come to realization later as you do it.” Her persuasion was a big deal to me because I’ve never met such an open and generous ocha teacher. So, I just followed the sensei’s instructions. 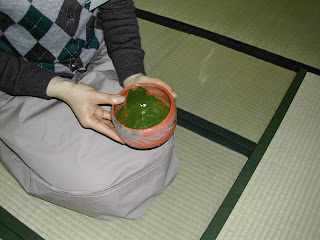 In this Kagetsu, we served bowls of both light and thick power tea. So, the photo is a leftover of thick powder tea. 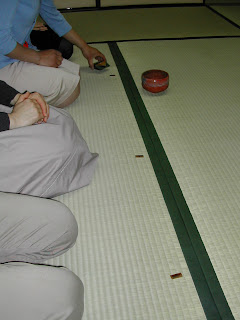 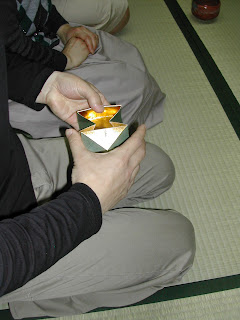 The whole process is a performance, and each member gets to serve a bowl of tea. All of us are quite busy thinking what to do next and when. The turn of serving tea or drinking tea is decided by drawing the bamboo chips, and we all look at the back of their chips at the same time. The shape of bamboo chips is concave. The shiny part is the top, and the back is one among moon, flower, and number one to three.

I don’t know how many different Kagetsu exist. But in the past, I saw a lovely summer Kagetsu. The hostess provided a bunch of tea flowers. The tea flowers are indigenous field flowers and have no scent. The members took turns to pick some flowers and inserted them onto a double wicker screen. At the end of the Kagetsu, the screen ended up a beautiful art of collaboration.

Now I can imagine what my mother used to do from her talk here and there, and what she left behind. Her Kagetsu required high skills and knowledge. Her group members wrote poems during their Kagetsu. They were all very knowledgeable in Japanese history, literature, and other arts. Those were the people who couldn’t help but recite major ancient poems in right occasions. To respond to one’s poem by a poem requires not only spontaneous writing skills but also quite deep knowledge about classical literature and history 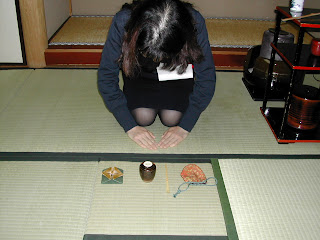 Ocha utensils attract practitioners to ocha parties. At the end of a performance, the main guest can request the performer to show some of the main utensils. The guest retrieves the utensils and returns to her seat and examines and appreciates them by gently holding each piece. The rest of the guests also have opportunities to see and touch the same utensils. The woman in the photo is called Hanto. Hanto is an assistant to the performer. She came to retrieve those utensils.

Like a small museum, we get to see pieces of arts and the best thing is we can examine and touch them and ask questions about the utensils. In some ocha parties, the hosts shows their valuable utensils made by well-known artists. It’s a great treat to see them up close.
Posted by keiko amano at 7:08 AM 6 comments: 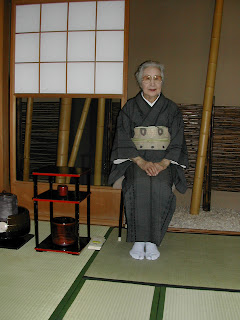 The sensei is a master of chanoyu. We call chanoyu, simply ocha. She is my current ocha teacher. I asked her how she began her study of ocha.

“My first teacher was very strict,” Sawanaka sensei says. “She was an old female teacher in my neighborhood. After our marriage, we moved, and the owner of the house in front of our new home happened to be an ocha teacher. So, I jumped right in. The teacher was a man.”

Sawanaka sensei’s story is similar to my mother’s. They both practiced ocha even during WWII. Can you imagine that ocha artists were serving bowls of tea under B29 bombers flying over the sky? Well, maybe those artists carried their ocha utensils with them and retreated to a foxhole during a raid, but as soon as quietness returned, they came out of the hole with their pottery bowls pressed against their chests. That’s a scene I’d like to write.

“During the war,” Sawanaka sensei says, “when we could no longer buy or make sweets, we made our sweets out of yarns.”

“Yes, sugar wasn't available,” she says, “We untied a used knitted sock and made our sweets.”

I just love listening to this kind of stories. I cannot express how much
I appreciate to be struck by the passion of an artist. So, I asked her if I could write about her and show her photos on my blog. She replied yes. 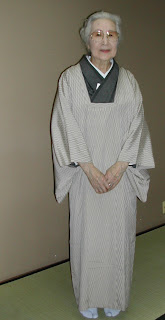 May is close to June, so Sawanaka sensei is wearing a single layer weaved kimono and a light green Nagoya obi. I look at her obi closely and touch her sleeve. The coolness of the kimono texture warms my senses. I imagine how I feel if I were wearing her kimono.

The obi and the band are darker green than they appear in the photo. Her coat is also very light greenish silk, and it is a classic design called yagasuri. Ya means arrow. Ocha performers depict the way to handle an arrow as in the Japanese archery when we pick a bamboo ladle or put it down.

Maybe, you haven’t worn a kimono in your life, so I will describe how I feel about it. When I’m wrapped in a gorgeous silk with a few proper undergarments and snuggly tied around in a long obi, I feel peace and beauty. For sure, my life becomes slower because I don’t want to soil my expensive kimono.

A good kimono has a therapeutic value. Either to wear one or just to look at it, it is enjoyable. I often stop and compliment the people who wear a gorgeous kimono. They are treasures, and if we wear one, we become treasures.

By the way, eight is the lucky number in our culture. This year is the luckiest year for Sawanaka sensei. She is 88 years young. It’s my lucky year, too, to meet her. She accepted me to her class even though I cannot sit down with my leg folded underneath. I have bad knees. Because of her kindness, I hope to learn as much as I can and as long as I can, and spread all her grace and sense of humor to the rest of the world.
Posted by keiko amano at 2:47 AM 24 comments: