“”Up to Sandakan” by Yamazaki Tomoko 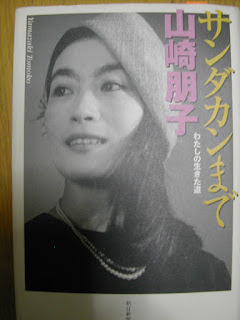 I’ve just finished reading this book.  Yamazaki Tomoko is the author of “Sandakan Brothel No. 8” and “Up to Sandakan” is her memoir that came out in 2001.   The story grabbed my attention right from the beginning and kept going until the end.

One thing made me very interested was that her mother was also a teacher of the Japanese traditional arts, Chanoyu and flower arrangement like my mother.   Some of her feeling toward her mother is similar to mine, it made me think.

In one of the scenes, the narrator describes how she was fired from her waitress job at a coffee shop.  At the time, she was married to a Korean man in Tokyo.  He came to Japan when he was very young, and at the time she met him, he was a graduate student in Political Science at Tokyo University.  He is multilingual.  Because the legal process of marrying a Korean person during 1950s was difficult, they were common law husband and wife, not on paper.

Anyhow, the owner of the coffee shop told her that she was fired because the owner found out that she was married to a Korean man.  Isn’t that amazing?  The narrator said to the owners, husband and wife, “But you are both Koreans, too.”  They replied, “No, we are no longer Koreans.  We became Japanese citizens.  So, we cannot hire a Japanese woman who married to a Korean man.”

Imagine that!  How bizarre!  At this point, the narrator does not give her thought on this.  She is speechless and totally perplexed.  Me, too.  But there are more than a few points during my reading this book that I could not really understand the feeling of the characters.  I think the issue is so dark, ridiculous, pessimistic, so twisted that nobody, both Koreans and Japanese cannot explain how they feel.  I think those confused people are confused because their feeling is based on what they imagine what others feel.  And their imagination is so wildly yucky dark. That’s the only explanation I can come up with.

For an example, the narrator’s uncle in Osaka to whom she has never met in her life goes to the relative of the Korean husband and blurts out all the prejudiced words.  Of course, I can’t understand why this uncle suddenly appears in the narrator’s life and go charging into a stranger’s house.  It’s so rude beyond any imagination.  It’s insane.  But a sad thing is that the very intelligent Korean husband, although he knows what happened at his relative house in Osaka, never tells his wife about the incident.  She found that out later on.  She doesn’t say, but I think that had a lot to do with their breakup.  You might say it’s because he tries to protect her.  No, I don’t buy that.  Even if that were his intention, I think it works opposite.  For husband and wife, we need to discuss these important matters until we are satisfied.  Otherwise, how could we overcome difficulties together?

The name of the Korean man is Kim Guantek.  He was born in 1930 in Cheju island of South Korea.  He was the head of the North Korean student movement in Japan in 1950s.  Because of much complication, she departs from him one day without letting him know.  She says she left him because she loves him and wishes he can pursue his true passion in his life which is to unite both North and South Korea.

I googled his name, Kim Guantek, 金光澤, but it’s strange that his name doesn’t come up.  He is a scholar specialized in international relations and North Korea.  He was at Oxford University in the summer of 1967, but suddenly he disappeared and his older brother in South Korea has never heard from him last 30 years.  The brother and his family members were investigated by KCIA.  They found nothing and were released, but the brother had to resign from his high position in the Construction Ministry.