rick plays shakuhachi
the word, shakuhachi, has only sei-on
flutes also have only sei-on
saito mokichi wrote hosohoso to describe the sounds of flutes
like all flutes, hosohoso is all sei-on

*for sei-on and daku-on, please search on the internet.
I also wrote a blog on "Pure and Impure."


Today, I returned to Kanagawa Modern Literary Museum to see the exhibition on Saito Mokichi's works, his personal belongings, and letters.  I was pleasantly surprised that they were scheduled to have a special event on Mokichi with lectures and a panel discussion.  One thousand yen included an admission to the exhibit, too.
It was all very interesting.  I listened to Mokichi's reading on tape .  As I've imagined before, yes, he had the wonderful northeast accent.  He was 14 years old when he went to Tokyo. That explained to me, besides his inclination to the language of the ancient manyo-shu, he had applied his northeast pronunciation into his tanka.  I think some beat or mora or whatever we call one sound of kana is sometimes missing in his tanka.  I'm far from an expert, but I'm pretty sure of it.  Of course, that doesn't make his work any less valuable.  It was fascinating to find out a lot of things today.  Now I enjoy reading his books.

A Man and a Reunion Photo 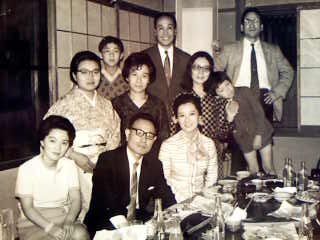 The Tsurumi Middle School reunion about 50 years ago.

I met Tanaka Kazushi san a week ago.  We were sitting side by side in the café next to a bookstore.  I was editing my haiku and tanka and about to leave when he said, "You must be studious person."  He introduced himself that he used to be an English teacher at the Tsurumi Middle School.

Then he pulled out a clear plastic case from his bag and showed me the above photo, but he couldn't remember the name of the actress on the right-hand side of the first row.  We debated her name for a while.  I told him that beautiful actresses seemed similar to me, but finally, I came up with the name, Koyama Akiko.

I remember her because she is a graduate of the same high school as I graduated although the name was different when she had attended.  It used to be girl-only high school before WWII.  I promised Tanaka san that I would blog about this in a week.  I hope he will be looking at this soon.

On the photo, Tanaka san stood in the back row and right.  The man in the middle at the front row was Tanaka san's colleague, and the rest of the people were their students.

We had a good chat before my kana shodo class.  The time was up.  I stood up and said goodbye.  He said, “Have a nice day,” in English.  I turned around and said, “The same to you,” with a smile.  He pursed his lips looking at me.
Posted by keiko amano at 4:42 AM 8 comments:

The Literacy of Japanese Women Part I


In support of Contemporary Literary Horizon, I have deleted the text.
Here you will find it.   Thank you readers and all the comments.
http://contemporaryhorizon.blogspot.com/2012/07/chm-4-30july-august-2012.html

Three or four weeks ago, I received an email from a distant relative of mine who lives in the U.S.  The last time I saw her was a few years ago at my home in San Dimas, California.  Earlier that day, I had invited an American friend of mine who teaches creative writing at Santa Monica College.  My distant relative is also a professor in the Japanese language and culture at Irvine Valley College.
“Are you in Japan?  Haruko san wants to get in touch with you.”  Haruko san is our mutual relative.
“Yes, I’m in Japan.”  I added my address and phone number to my reply.
To cut the story short, someone has contacted Haruko san regarding Yamada Kikan who is my great grandfather.  Kikan is the father of my mother’s father.  Because of the internet and my blogs, Asada san found me and had his granddaughter translated some of my blogs.  One of the blogs is about Yoshimura Heishichi the fourth who is my other great grandfather.  Heishichi is the father of my mother’s mother.  In that blog, I pasted the url of the organization, Takasaki Kurenai-no-Kai, and its founder’s name, Yoshimura Haruko.  So, Asada san sent his inquiry to Haruko san about me.
Now, I found my new relative in Shimane prefecture.  How wonderful!  I told Asada san that I thought all my relatives on my mother’s side always lived in Tokyo because growing up, all the relatives’ homes I made visits with my grandfather or mother were all in Tokyo except a summer house owned by my grandfather’s older brother.  Shimane prefecture is quite far from Yokohama and Tokyo.  It’s beyond Kyoto.  I’ve never been there.
Since our first email contact, Asada san and I have been exchanging email and phone calls, but no snail mail yet.
It is May 7th.  I receive a phone call from Asada san.
“Have you received my mail?”
“No.”
“I sent it on May 1st.”
“Have you sent it by Blackcat Yamato?”
“No, I sent it from post office.”
The Japan’s post office has been privatized, and snail mail might come via one of commercial delivery companies.
“Because you said you are interested in writing about the literacy of Japanese women, I’ve sent you a copy of Iwa san’s letter.  I went to a photo shop and made a color photo copy of the letter.  That way, you can see more detail close to the original.”
“Maa!  Thank you!  Gee, I wonder what happened to the envelope.”
The letter means it was written by my great grandfather’s mother to her younger sister.  The mother’s name is Yamada Iwa, and the younger sister, Tsukamoto Chie.  Chie is the great grandmother of Asada san’s wife.  The maiden name of Iwa and Chie is Kawakata.  Iwa was born in 1837 and died in 1916.

Earlier, Asada san and I had a phone conversation, and he told me about a number of photos and letters related to the Yamadas he owns.
“The letter is written on a small piece of paper,” Asada san says referring to Iwa’s letter.
“Is that right?”  I imagine the letter to be like 3” by 5” or so.  It’s probably like a scratch paper.  For some reason, it looks casual, not formal in my head.
“She wrote it in hentai-ji which was then the standards.”
Hentai-ji is a mixture of kanji and kana without strict rules and usage.  It’s been that way in writing Japanese up to quite recently.  The modern standard way of writing was enforced throughout Japan in 1947.  Before then, people used hentai-ji of various kinds throughout Japan.  The situation is similar to Chaucer’s writing.  Hentai-ji is similar to that.
“That’s a true wonder, Asada san!  How had Iwa san learned how to write such a long ago?”
“That’s been quite a mystery to me,”
“Amazing!”  I usually don’t ask people for anything, but I wanted to see the letter even if it was a piece of scratch paper or the content trivial.
“I don’t think she went to school.”
My wish to take a look at the letter shot up.
“I agree with you.  I don’t think there were schools for girls.  Asada san, I’ve been writing for a while.  I’m interested especially in languages, and I’ve been reading on related subjects like linguistic, history, comparative literature whenever possible.  I’m not working on a degree, but I’m extremely interested in the literacy of Japanese women.  I want to write about it.”

“The letter is pink.”
“Pink?”  I feel something throughout my whole body.
“Yes, it’s written on a piece of pink paper.”
“Pink wash paper!”  I usually try not to ask people for a favor.
“Please do me a favor and take a photo and send it to me, please.”
“But I’m eighty five years old.”
“85 is still young!  You can email.  With a cell phone camera, it’s easy to take a photo and attach it in email.  Asada san!  Please!”
“My cell phone is old type.”
“You can ask someone to take a photo and just click, click, and send.  It’s very easy.  If you can’t and if you don’t mind it, I’ll travel to your place and take photos!”
I’m so excited.  I haven’t been as excited as this for a long time.  If my mother were alive, this would be her second dramatic discovery of our long lost relative.  The first time was Haruko san’s family when I was in elementary school.  Haruko san is my mother’s cousin.  Before then, my mother didn’t know she had a cousin in Takasaki City.
After our first phone conversation, I feel glad just knowing a pink colored letter written by Iwa san existed.  I can still write something about it without actually seeing it.  I can ask Asada san later more questions.  I enjoy talking with him, so he probably does also.  We have the same mutual interest.
The envelope containing the laminated copy of Iwa’s letter has arrived in that afternoon of May 7th.  Thank you, Asada san!
Posted by keiko amano at 2:26 AM No comments:

The Flower of the Caltech Campus 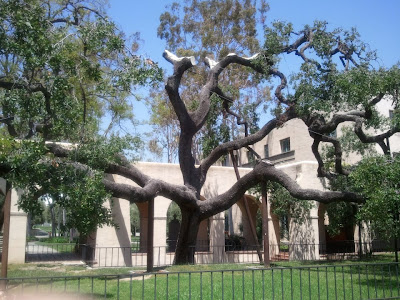 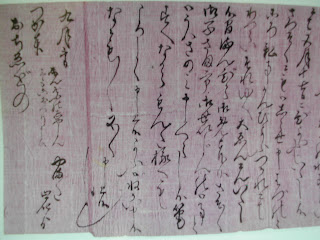 Iwa was born in 1837 and died in 1916.  She is my great grandfather's mother.  She wrote this letter to her younger sister Chie.  I'm thrilled to find this letter!  Thank you, Asada san!  Chie is his wife's; great grandmother.  We are related!  I will be writing my second memoir, I think! 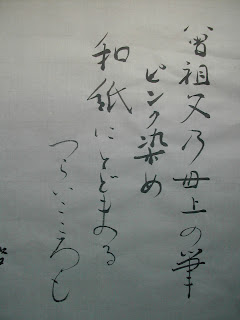 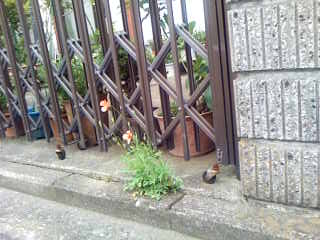 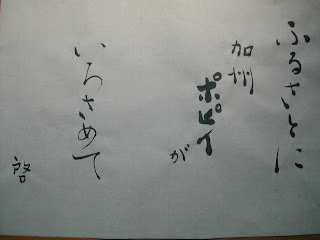 Satsuki and the Old Man 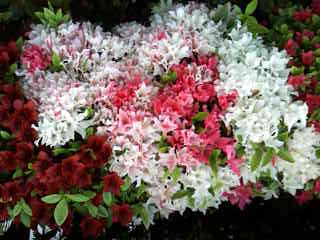 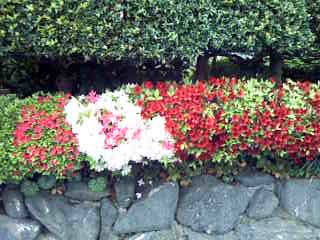 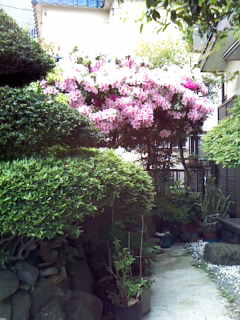 Last year, I used to talk with the old man.  He was out caring for his flowers daily.
I've been wondering if he went into hospital.  The woman said he passed away.  We chatted a little about my blog.  I told her he liked my photos.  Below are those photos.

Posted by keiko amano at 2:00 AM No comments: