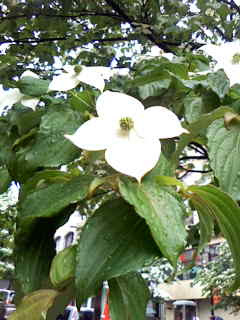 American Dogwood is my most favorite flower, but I often wonder why anyone named this beautiful flower dogwood.  I like dogs, but still, I can't understand that sensibility.  You may have different opinion.  Please let me know, and if you think the name is also beautiful, please convince me in your words.  I desperately look forward to your words. 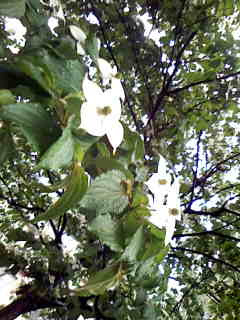 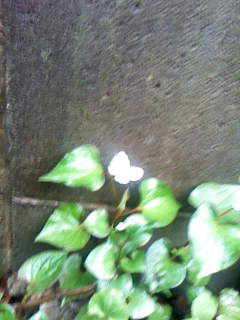 Dokudami is beautiful, but I think it has been discriminated against.  The flower has been always planted near the bathroom for ages.  Dokudami means to stop poison. 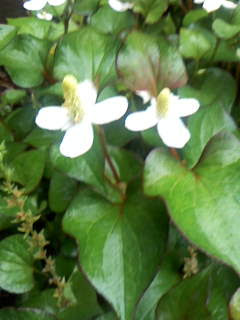 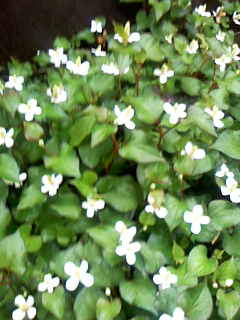 In English, Dokudami is Lizard's Tail.  So, the name is still not as beautiful as I like for the flower.
I guess it is the proof of life being unfair.  What do you think?  ﻿
Posted by keiko amano at 5:06 AM 6 comments: 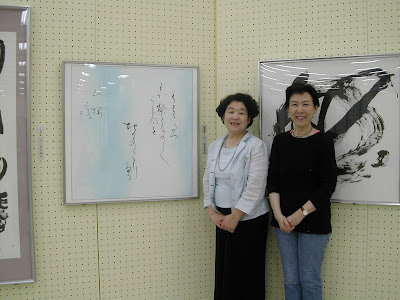 Today, I made a visit to the 54th Tohoshoten (the name of this exhibition) in Tokyo.  The exhibit is open until tomorrow, 29th, at the Sunshine Bunka Kaikan in Ikebukuro.﻿  In the photo, Iida Kazuko Sensei and I are standing next to her kana shodo.  The style of this kana shodo is called chowa-tai which means it is balanced using a few kanji characters.  This is also called chirashi which means scatter or let it fall.  I love chirashi.  It is a casual art, very playful, but it demands high spirited creativity.  It's up to us to choose what kind of kana for each, how many in one line, how many lines in one group, and so on.  Depending on the way we leave spaces and the movement of over all lines, we can express a lot.
The above poem is "Mountain Cherry Blossoms" by Wakayama Bokusai.
young leaves sprouted and spread out
﻿like clouds
the fallen remains of
mountain cherry blossoms
﻿
﻿ 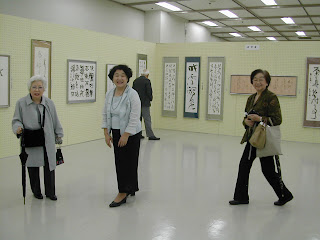 Iida sensei and her students.  I love this photo.  The movement, a man behind, all the unique and excellent arts created by the teachers and judges of Tohoshoten organization.  This was room No. 1, and it was the best, of course.   This exibit has about 50 rooms.  It was fabulous. 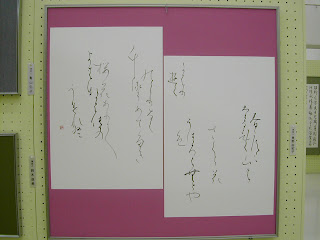 This shodo was created by Higashino Yukiko san.  She is a classmate of mine. 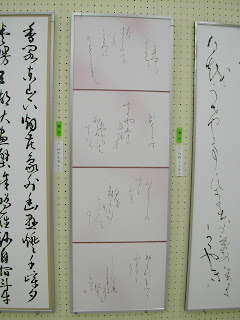 This sho was created by Yano Chiyo san.  She is a pupil of Iida Sensei.  I want to let you know that there is no age limit in arts.  The author will be 90 this year.   Her sho is as young as Iida Sensei.  I can't read what it is written, but I'm sure it is something to do with love!  I can't wait to be a cool 90 year old like her.
Posted by keiko amano at 3:40 AM 4 comments: 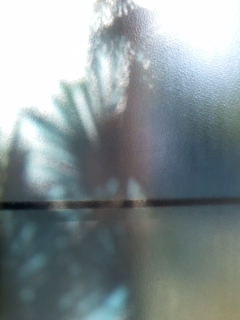 my window showing windmill palms, a branch of weeping cherry tree
﻿If I had a second chance, what would I want to do?
Master Chinese, Hindi, and Arabic.

If I had the third chance, what would I want to do?
Master Korean, Russian, and Mongolian.

If I had the fourth chance…
Master Spanish, German, Portuguese, French, Danish...

Would all the languages survive long enough for me to learn?
Also, I want to include Greek, Latin, Hebrew, and Sanskrit.
What order in my reincarnation should I learn Sanskrit?
What if prospective languages are gone? Wait a minute. Maybe I’m living in the Japanese-and-English part of my reincarnation. I wish we can carry over our languages to next life and add them to new languages.
Posted by keiko amano at 4:49 AM 12 comments: 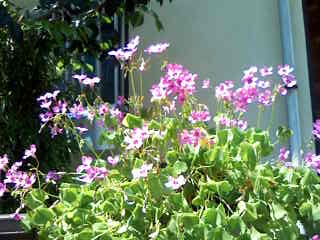 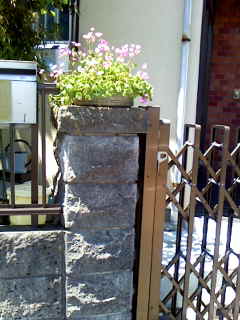 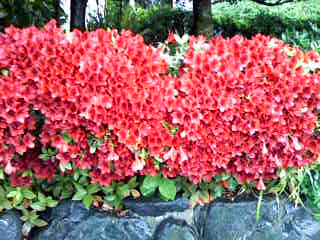 ﻿
I took the top two photos this morning. It was drizzling.  The flower is satsuki which is similar to azalea (tsutsuji), but the flowers and leaves are smaller.  It's coincident.  This spot, near the river closed to my place, used to be the home of my childhood classmate, and her name was Satsuki because she was born in May.  Satsuki can be a season word in haiku, and Samidare (May rain) also.  The bottom photo shows the asphalt below under the satsuki bushes. 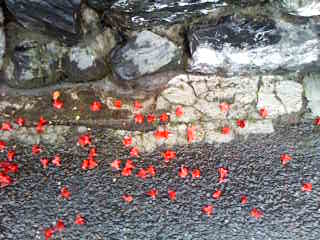 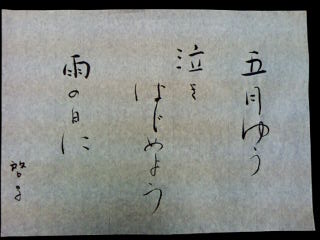 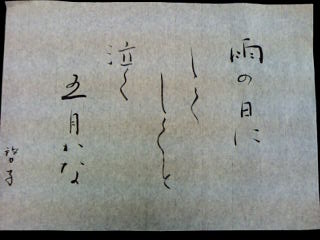 ﻿
This afternoon, I wasn’t up to practice kana shodo. I made some black ink and read some good poems. I thought about the photos and came up with two haiku.

The first one is


Satsuki says
Let’s cry together
On a rainy day


The second one I cannot translate because of onomatopoeic. We make sounds crying such as shiku-shiku.


Well, I felt much better at the end of my kana shodo class.  I was the last to leave the classroom.
Posted by keiko amano at 6:18 AM 3 comments: 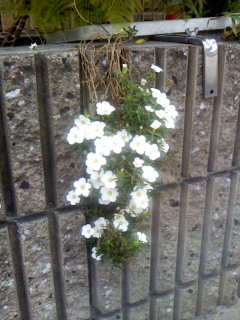 The US economy must be picking up. I received some email from US recruiters. There must be a demand for infrastructure and disaster recovery experts there. This is a coincident because I’ve been following up on a secondary disaster following the earthquake and tsunami. The Mizuho Bank’s systems disaster showed up a few days after 3/11.


Mizuho has reported that deposits into two earthquake-relief funds inundated their systems after March 12th but couldn’t handle it. “It” is the problem. We don’t know exactly what it is. The systems started limping afterward, but partially operating systems meant not working at all. The batch window is limited. It must complete by morning. I think the bank couldn’t balance all the accounts before the start of the following day.

This was in the middle of the Disaster. Affected people needed cash. The bank closed all ATMs for three days to recover, but they announced that the users could go to their branch offices and withdraw up to 100000 yen which is about $1200. Guess what? Some users went to their different branch offices and kept withdrawing 100000 yen even though they didn’t have money in their account. Talking of chaos! The problem didn’t come to end until 10 days later.

To compete in the global financial world, Mizuho was created by merging three large banks, Fuji, Daiich-Kangyo, and Kougyo banks. Not two but three banks at the same time. It kept the old accounting systems of former Daiichi-Kangyo Bank, and the up-to-date information systems of the former Fuji Bank. So, the system could handle transactions from all over the world all day and probably almost all night. So, you can imagine the kind of systems projects they had to go through. It must have been very tough, so when I heard of their 2002 system outage, I was sympathetic to their systems programmers. They probably had many sleepless nights. But, that wasn’t the last disaster. They and probably anyone probably never thought of receiving such large number of deposits concurrently without stop. Well, it happened.

A few executives probably have to resign from their posts to take responsibility. For the government, this event has been a good opportunity to go in and investigate the bank’s internal operations closely so that they can make sure the bank cannot fail to pay all the taxes even if their systems collapse.
Posted by keiko amano at 6:31 AM 2 comments: