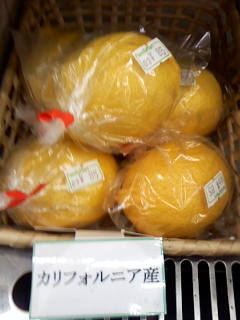 The Japanese woman whom I’ve been teaching English whenever we happen to meet told me the other day:
“I’ll be joining my kids’ English school for a weekly lesson.”
“Do you get family discount?”
“Yes.  It’s additional 6000 yen.”
“Is your teacher American?”
“No, she is a kikokushijo (a school-age returnee) like you.”
“I’m not a kikokushijo, but they all have various language experiences.  So it’s difficult to judge who is best.  It also depends on their parents.”
“Do you think once a week is enough for me to become fluent?”
“To become fluent in English is hard for Japanese adults.”
“But you speak fluently, don’t you?”
“Yes, but it’s been very hard.    It still is.  It looks easy, isn’t it?”
She nods.
“Fujiwara Masahiko (well known mathematician) described it as a blood-oozing pain. I agree with him.”
Her lips open.  She makes a frown like biting into a piece of lemon.

"Who is Don Quixote?" by Lo Shih-Tung 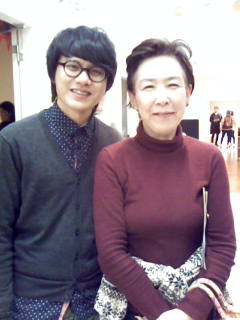 I had someone take this photo a week ago without having any plan like blogging.  But I’m glad I did.  It’s always something.  While surfing Facebook a few days ago, I saw a photo of Andy Warhol and Pat Montandon on her wall.  It reminded me of my photo with Lo Shih-Tung.  Pat is a writer, and we’ve been bloggers on Redroom.com.  I liked her photo, and I thought Lo Shih-Tung could be next Andy Warhol!

On March 16th, I was invited to the opening party of Lo Shih-Tung’s contemporary, installation-type of arts by a friend of mine, Mrs. D.  Mrs. D is very important in this story as well as the artist or Andy Warhol.  I would get to Mrs. D later on, but as a volunteer, she was helping to prepare for the party.  That party was free of charge and refreshments included foods and Taiwanese beer and tea which I didn’t know.  So, I had a dinner right before I headed out to the BankArt Studio NYK building at the Yokohama Harbor.  The water and the main entrance of the building was probably 100 feet or less.  Yes, it was a neat location.  It used to be a warehouse owned by Nihon Yusen.

After the party, I browsed the lobby, paged through their many beautifully designed fliers and pamphlets, sat down at the largest table, and waited for Mrs. D.  It was 9:30 pm.  She came out saying she was starved.  She ordered a dish of Thai Curry from the lobby café and a cup of coffee for me.
“Why didn’t you eat the refreshment?” I said, “They had plenty of foods.”
“We were told not to.”
“That’s not good.  They should feed the helpers first before they start working.”  I imagined how humiliating to be hungry while serving foods.  How could  we help in empty stomach?  I wouldn’t recommend it.  The volunteers had probably been working since the lunchtime.  I felt sorry for Mrs. D.
At the table, she ate her curry while I sipped my coffee.  More volunteers gathered at the table.
“Am I relieved to find out “Don Quixote” wasn’t what I thought it to be.”  I referred to the title of the exhibition, “Who is Don Quixote?”  The title meant one of discount grocery chains in Japan, not the famous character from the classical French novel.
“I’m glad you made it.”  Mrs. D kept saying it.
The leader of the exhibition and the artist also came to the table.  Before I knew it, I was in the middle of their meeting.  I felt I belonged to this group.  I love arts and artists anywhere.  Because I felt comfortable, and everyone seemed friendly, I raised my hand at the end of the meeting.
“What kind of project would you like to work on next?”  I said to the artist.
“I want to make a Kurosawa-Akira-like movie based on the Don Quixote shop at Hinode-cho.”  Hinode-cho is quite crowded, hustle-bustle kind of town in Yokohama.
“If “Don Quixote” allows him to do it,” the leader next to the artist replied with a smile.  He must be Mrs. D’s boss.
I smiled back.  A few people said something here and there looking at Mrs. D and me.
“Did you understand what he said?” Mrs. D whispered to me.  “He meant the artist might not be able to pursue his project because of me.”
“Why?  What have you done?”
“I was asked to get some Don Quixote’s uniforms just for the opening night.  One of my children became ill, so I couldn’t travel to Hinode-cho.  I went to a local Don Quixote shop instead and explained our needs.  The manager there looked at the flier of the exhibit which I handed out to him.  He spotted the logo of their shop all over on a page of the flier.  One thing led another, and he reported it to the corporate office.  As the result, my boss had to make his apology trip to the corporate office in Tokyo.”
“Good Grief!”  I fumed.  “It’s a non-profit art project.  If it becomes commercially successful, that’s different matter, but still the businesses will only benefit from the exposure.  Do you think Campbell Soup sued Andy Warhol?  I don’t think so.  It can be a win-win situation.  Why should your boss go apologize?  If I were him, I would have charged the ads money instead!  The artist could have chosen other store like ‘Matsumoto Kiyoshi’ or something.  There are plenty of innovative stores to choose from.”

Here is an excerpt from Lo Shih-Tung’s essay on the flier.  “My curiosity was kindled by the shop’s somewhat exaggerated name, while its crude layout and silly appearances fascinated me deeply.”
That’s honest.  I like it.  Then, he continues:
“Ultimately, it comes down to just laughing the whole matter off, or to viewing it as a modern fable…..”
In his essay, I see direct and straight assessment of the ultimate consumerism.  Then, yesterday, I was in Sakuragi-cho and needed to walk to the Hinode-cho station as often I do to clear my mind and eyes.  I usually walk past Don Quixote because the thought of entering the store gives me headache.  I like peace and quiet.
But because of Lo Shih-Tung’s art, I went in to check things out.   Merchandises were packed in the small store from the floor to the ceiling.  I held my backpack in my hand and close to my body and stepped through each aisle trying not to touch their products behind me.  I wondered what Andy Warhol would say or create out of this experience.  Maybe, he would make many Hello Kitty goods pictures instead of Campbell Soup cans.  I also thought what would happen to such crowded store if a big earthquake erupted and a tsunami hit.  The store must be heavily insured.  It was an interesting cultural experience because in the U.S., I didn’t think the store could pass the fire department regulations.  I bought a package of hot cocoa, and I was happy.
As for Mrs. D, she is an aspiring actress.  I’ve been trying to persuade her for more than a few years that she learns the main role of my play originally titled “Yesterday.”
“That role has too many lines,” she said.
“Well, you could be missing a chance in life time.  I’ve been rewriting it and plan to send out to Seinen Gekijo (Young People Theater).  The deadline is the end of March.  If they pick my play, you’ll be sorry.”  I winked at her.
Her eye lids drooped.  She looked exhausted after her long day.

I support arts and artists as my mother also had done all her life.
Congratulation to Lo Shih-Tung on his new art exhibit “Who is Don Quixote?” http://www.bankart1929.com/news/2012/03/2011lo-shihtung.html
Best Wishes to Mrs. D for her career.
Good luck to all of us including me.
Posted by keiko amano at 1:17 AM 4 comments: