Here is Kanda Kyoko!  She is my favorite talk artist.  Whenever she appears at Nigiwaiza in Yokohama, I go see her.  Her talk art is called Koudan 講談.  It is different from Rakugo 落語.
In Koudan, artists talk before a low table and use a spatula (I don't know what to call that) to make sounds for rhythm. 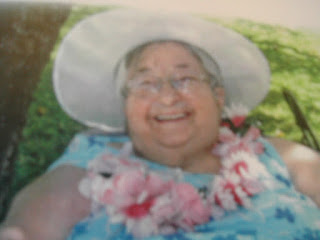 She was the chairwoman of San Dimas Writers Workshop for 20 years.  Her last four years, she could no longer chaired the meeting, but I heard from her daughter today that her spunky spirit remained the same, and even on her last day, she still talked with five people while her breathing was getting difficult.  That’s amazing.

I guess I tend to be serious when I give my comments to writers.  One time, she looked into my eyes after reading my comments on her entertaining essay and said,
“Keiko, you’re too serious!”
She is right.  I need to remember that.  Thank you, Pat!

Today was my second time I attended the Jewish funeral.  I loved the songs the cantor sang playing a guitar.  He had the deepest and beautiful voice.  He guided us, and we sang together.

After the funeral, people left one by one, and four or so women from the group were still talking.  I felt good knowing Pat is in peace now and her family also.

One thing I learned today.  Pat’s grandson was asking us if Pat wrote about him.  We couldn’t say for sure, but all we remember was her funny fiction or essays.  I looked at his face and voice inquiring about his grandmother’s writing if she wrote about him.  His words touched me.

Then I thought about my four-year-old grandson.  I was thinking of writing a funny travelogue of my daughter’s wedding we attended together last summer.  There was a few stressful moments during the trip which I could turn the story into a comedy.  Wait a minute.  I have to write something nice in case I die in near future.  I don't know if my grandson cares to know that his parents gave him the largest sized fruit smoothies, and on the way back on freeway, they had to pull their car over to the side of the rightmost lane twice and rushed him out of his car seat and pee in public.

I have to think about that.  Thank you, Pat, for your advice and inspiration.
Posted by keiko amano at 12:20 AM 10 comments: