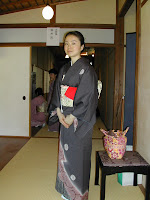 Last Sunday, seven chanoyu schools held their gatherings at Sankeien Garden in Yokohama. I spotted this young beauty wearing an exquisite kimono. Most women refuse to be taken photos, but she agreed. I liked her and her kimono. She is a Urasenke Chanoyu student.

I had a ticket to attend each, but I just visited only two. I hope to show you more photos later on when I get enough time. 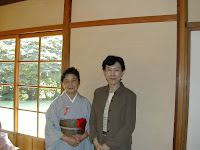 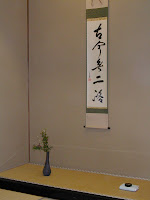 In olden days or today, it has never been two roads. 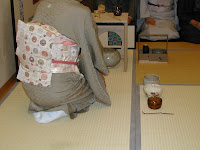 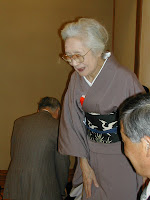 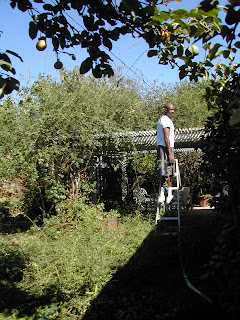 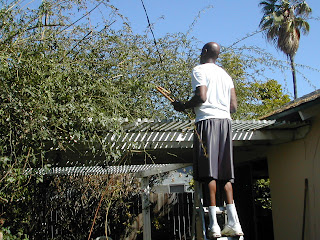 If you’re a basketball fan, you probably know him. I live next to the former basketball star Dennis Johnson’s sister’s house. He passed away a few years ago. Her husband is a retired police officer, and his name is also Dennis. He’s been helping me out in my jungle yard.

Until a month ago, I didn’t know my neighbor is a sister of Dennis Johnson. She showed me his pictures and said,

“He had visited me here a few times.”

She looked at my nose. She has cute freckles like his brother.
Dennis coaches a basketball team, but he said he has to stop it next season because he wants to see his son play. Little Dennis will be a member in a college basketball team. I thought Dennis got his priority straight. 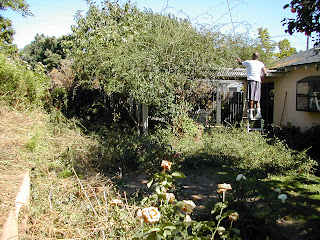 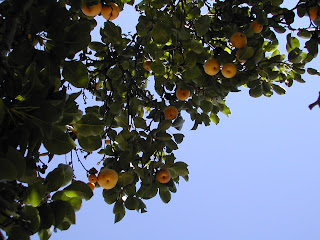 My rest from blogging has brought me luck. It was a good thing, so I’ll continue to rest time to time. But I want to let you know that out of my resting-from-blogging period, I clicked the place I probably never would have clicked. It was my near dead former blog site below.
http://keiko-booksandtalksfromlosangeles.blogspot.com/

A new message was left there for more than seven months. It was from Daniel Dragomirescu of Contemporary Literary Horizon. To make a story short, I’m excited to tell you that my poem and story will appear in the next CHMagazine. I don’t know how it will all work out because it is just happening now, but Daniel is talking about translating my work into Romanian and Spanish.

Wow! Is Daniel talking about not just publishing my pieces in his magazine, but in three languages?! I write stories in Japanese also, but I don’t even translate my own English work into Japanese. It takes much effort to translate even one small poem. How can I express my excitement?

I appreciate this place. I appreciate you very much for reading this.
Posted by keiko amano at 11:27 AM 10 comments:

I’ve been thinking about subtle differences in the way we move in daily life and in performances across cultures. A few times, I realized that I misinterpreted others’ movements just like words. But that’s no news to me. Probably, I have misinterpreted a lot in my life! And I can’t help but continue to think about this curious phenomenon. But this end-of-summer blog is not about misinterpretation. It’s about understanding.

Throughout this summer like any other summer, I thought and wrote about language, misinterpretation, and the way we think and why. For end of summer, I decided to stop and write just one topic.
Please take a look at the following blogs on puppets.

The Bunraku puppet is leaning forward, and the Thai puppet is not. For some reason, I felt this significant. But, of course, the photos were shot from different angles, and the stories and characters also must be quite different. Besides, I’m sure Thai puppeteers tilt their puppets forward, too, in performances. So, why do I still see it significant? That was my question.

I thought about the downward movements I used to make more often. Growing up in Japan, I used to bow a lot. My mother made me sit on a tatami mat and bow when guests arrived. She died in 1996, and Japanese customs have been changing, but those stories are for another time.

So, I clicked youtube and watched a number of puppet videos. It made me think more about Japanese downward movements. Then, I found the following video. http://www.youtube.com/watch?v=pJzcLvjBp_4 Sure enough, Bunraku puppets are made to tilt their heads down by a string. I appreciate the author of this video.

As far as I’ve seen Thai puppets have straight necks and remain the same even though they can move hands in an intricate way. I watched one puppet did all kind of tricks. Then I thought about the scene that Thai people bowed to older people with bent knees, and the graduation photos of Chulalongkorn University students in which the king hands diplomas. In those photos, graduates bend their knees and their hands are in a praying position. So, Thai puppeteers manipulate their puppets based on those movements. And Japanese probably make their puppets tilt forward more often than Thai.

It’s probably obvious, but I think head tilts down or body leans forward is important in our culture. It’s true we bow often. It must come from our belief since the ancient time. Belief is a curious thing. It comes out differently in each culture like bows. Last November, President Obama went to Japan and bowed to the emperor and empress. I happened to watch it on the television. It was probably his first bow in that visit. The emperor looked calm, but the empress’s hands lingered on. I could sense her thoughtful concern about his bow. She probably wished no possible backlash in his country. I don’t know if he felt her concern.

But, President Obama took that chance, and the royal couple must have been pleasantly very surprised. Nobody ever expected it. He is the first American president to show sincerity that way, knowing the backlash. It must have been very very difficult. Because of it, the following week, I paid more attention to his motion. I think it was a healthcare issue, he was making a speech. The issue could be something else. During the speech, his chin went way up. I thought maybe because of the prior backlash. It made a contrasting impression on me. I thought if chin goes up in speech, and in other time, body bends in bows naturally without thinking, that’s totally bicultural. Come to think of it, if a Japanese prime minister raises his chin like what President Obama did in that speech, he will for sure get a backlash in his country.

Back to the puppets, Japanese made puppets’ heads to tilt down. That’s understandable. Then, I thought about string puppet which must be western. They tilt their heads easily and can move like spaghetti. Oh, Italian! I’m kidding. I only read a related Wikipedia site, and I didn’t see how ancient Greek puppets look like. According to youtube, those Thai, Japanese, and string puppeteers are so skillful. They can evoke emotion. And again, I thought if Japanese perform western string-puppets, they would probably end up using more downward movements than western puppeteers.

So, what does this lead us to? It’s a word, goh (業). Some Japanese would write gou or gyo. Goh is Karman, which is a Sanskrit word. According to a Japanese dictionary, goh (業) is action or job, and it derives from three parts, body, mouth, and will. All of our actions including subtle differences in movements show up as part of goh.

When I go to meet Japanese, I bow. When I see my Taiwanese friend, I bow, too, because she speaks Japanese, and we share the culture. Thinking further on bows, we can bend our body easily, but bows are not easy matters, not only for President Obama, but for Japanese also sometimes. Sometimes, a conflict could occur on my mind when a bow is not backed with a proper word or appreciation. I think this is the way ancient Japanese thought, and even today, many of us still think the same way. It’s the sense of goh, and we constantly act on it without thinking. It’s the motion coming out of our belief. And the ancient Japanese belief in goh shows up in the Bunraku puppet in the photo.

I always thought this interesting. Thai and Japanese cultures are based on Buddhism, but appearances are different. The sense of connectedness must be similar, and it comes out of our body, mouth, and will, wearing different clothes, I think.