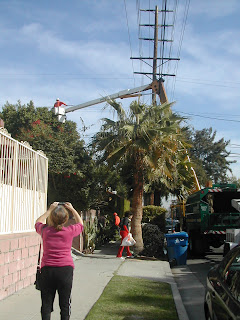 Julia Stein has been helping me edit my memoir, and as far as I'm concerned, it is finished. So, I'm celebrating this end of the year accomplishment through this blog, "Melrose." Above, we were admiring the worker cutting tree branches. He maneuvered the machine skillfully through multiple lines. I was saying to Julia, if I were doing it, I would be electrocuted by now. It was an impressive site. 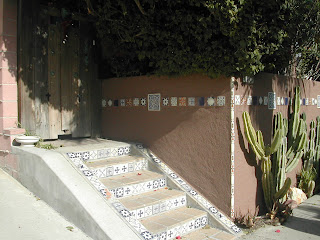 I liked this south-west styled corner. 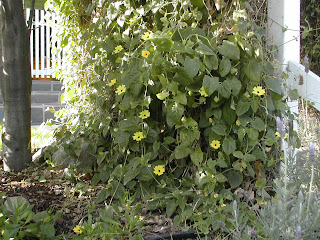 I also liked this yellow flowers with a brown spot at the center. The shape of the petals looks as though someone cut them neatly in that shape. But of course, nobody but the nature has done that creative thing. I was amazed by it. If anyone knows the name of the flower, please let me know. 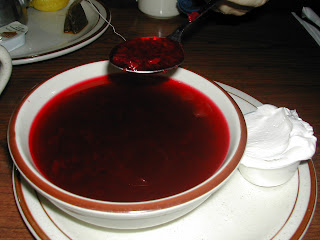 Yes, I had a bowl of cold beet soup borscht with two Blintzes at Canter's. Julia was amused looking at my face staring at the soup. She asked me, "Can I write about this on Facebook?" I said yes. Well, if I went home without eating borscht and blintzes, I would regret. My motto is not to regret whenever I can help it. This wisdom of mine will continue to next year. 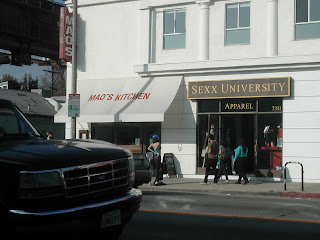 Melrose has changed since I used to go there for lunch when I worked on Wilshre. Now, it looks like Halloween. I don't know why but most people wear black. On the photo, the woman on left is a mannequin.
Posted by keiko amano at 10:30 PM 4 comments: 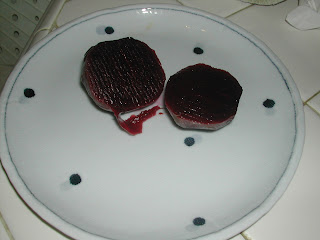 I love beets. This beet was so delicious that I just had to take photos. 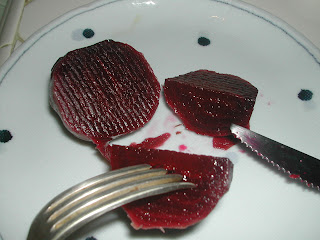 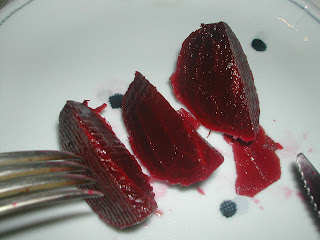 It reminded me that I haven't cooked BORSCHT (BEET SOUP) for a long time. It's simple soup to make and eat with sour cream. For Japanese, red and white are for celebration like the Japan flag. 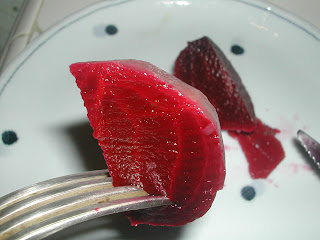 The water that cooked the beet tasted good also, and the color was beautiful ruby red. 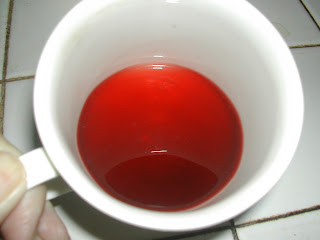 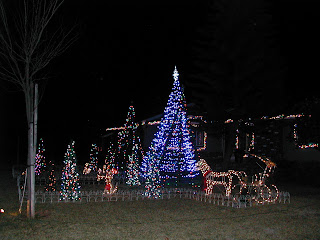 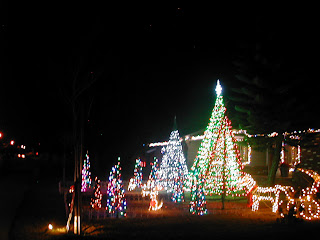 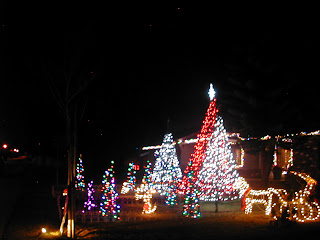 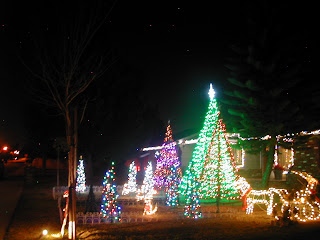 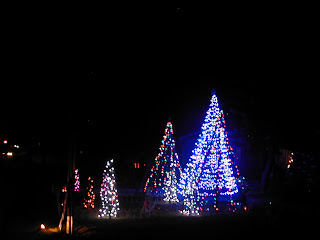 That's all.
Posted by keiko amano at 7:55 PM No comments: 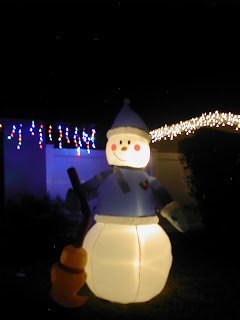 Snowman in my cul-de-sac 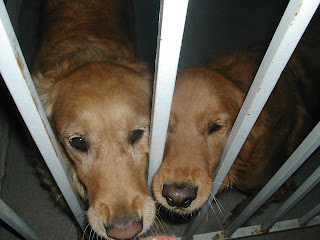 My neighbor dogs I love. 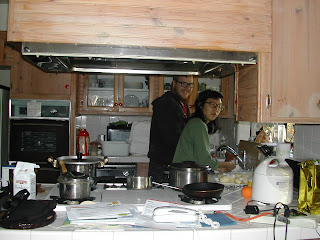 My daughter and fiance grow vegetables. I can't wait to eat their beets. 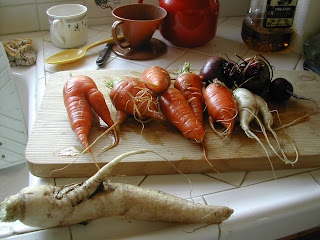 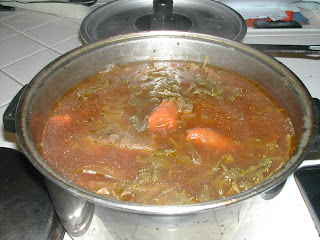 I'm into no stress holidays. You can say I'm retired from the holiday business. I told them to feel free to make mess in my kitchen. I'll clean up later, and that will be my Xmas present! They like that. Happy Holidays!
Posted by keiko amano at 12:24 PM 8 comments: 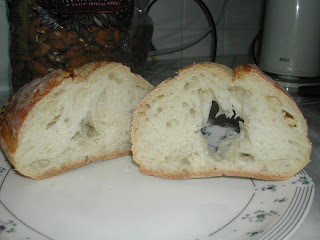 The last time I listed my popular blogs, the top was "Kana Shodo Part 1." Now, it is the third. 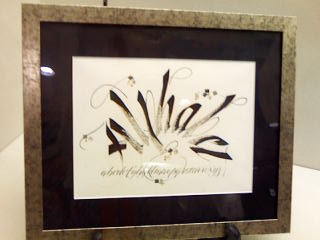 Because I've shown you some Kana-Shodo and Arabian Shodo art products, I've been hoping to see alphabet calligraphy. It was my plain luck that I saw one at Yokohama Asahi Culture school before I left for the U.S. The photo quality is not good, I'm sorry, but I'm excited to show you this. This is their most current exhibition at the lobby of their school. You get an idea of what I saw and why I was excited.

Calligraphy is an art and therapeutic. I don't understand why American or British schools quit teaching this art. It can be an elective. What do you think? 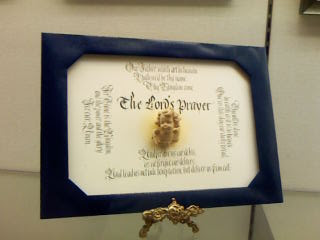 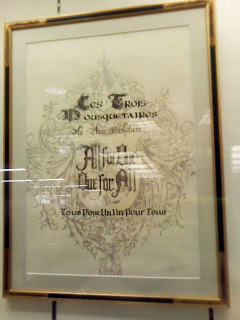 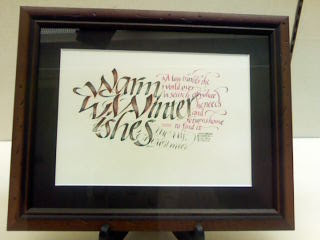 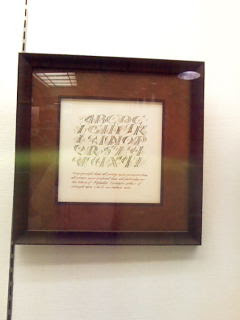 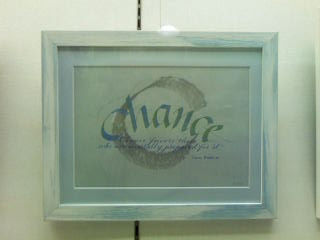 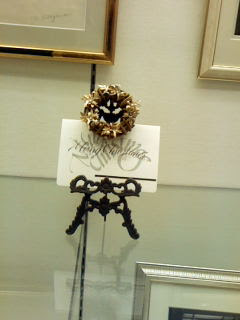 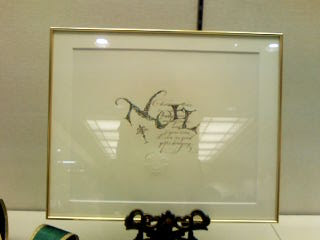 On Dec. 3rd, I was lucky to attend this seminar. Three speakers (Kashiwagi Takao, Aritomi Masanori, and Matsubara Hironao) came and gave their talks related to the nuclear energy in Japan and the world and its future. This seminar was open to public, but I think it used to be only for the graduates of Tokyo Institute of Technology. So, most attendees were probably their graduates. Iida-san persuaded me to apply because getting a ticket is quite competitive. Before last summer, I had asked him to let me know if the school has any seminars scheduled relating to nuclear disaster issues. Thanks to Iida-san, my application was accepted.

So, I was there. I sat at far left hand side. The meeting was good, but it was overall summary and vision. I have not much to talk about it here. But, have you noticed a roomful of gentlemen on the picture in the above web site? Yes, they were all men. I think I was the only woman except I heard that the president's wife was there.

After the seminar, I joined a tour of their new library. The library looks like an ultra modern architecture in triangle shapes. They have over 10,000 journals, so I plan to check it out again. Besides, I want to see their museum. I haven’t seen it yet. I’m interested in the history of this university.

These were presents for attending the library tour. 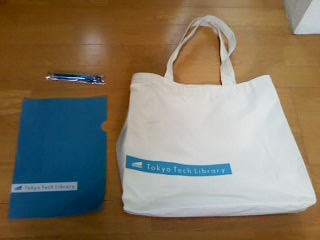 Posted by keiko amano at 1:29 AM No comments:

I've blogged about the Japan Fine Arts Exhibition and shown my photos of the picture cards that I had purchased.  But on this blog, I am able to show you the photo of a real award winning kana shodo art created by Iida Kazuko sensei.  I've complained to her husband through his blog that I wish I could see it more clearly.  Thanks to him, he sent me a clear photo!  He wrote on his blog that he could not read it, so the art is like a picture to him.  I agree.  I neither can read it entirely, but I wish.  If I find out the entire poem and meaning, I'll eventually add to this blog in comment section.
Enjoy by learning and learn by enjoying is my motto.   Because you have already clicked this blog, you have learned something.  If you have enjoyed it,  that means you have learned more.  I hope you agree.
Posted by keiko amano at 11:49 PM 3 comments: