being rewritten
Posted by keiko amano at 3:37 PM 7 comments:


being rewritten
Posted by keiko amano at 5:19 PM 4 comments:

being rewritten
Posted by keiko amano at 11:47 AM No comments:


In support of Contemporary Literary Horizon, I have deleted the text.
Here you will find it.
http://contemporaryhorizon.blogspot.com/2012/07/chm-4-30july-august-2012.html
Thank you readers and all the comments.
Posted by keiko amano at 5:40 PM 2 comments:

Labels: history, Japanese women's literacy, the end of all the hans, the Hamada and Tatebayashi hans


In support of Contemporary Literary Horizon, I have deleted the text.
Here you will find it.   Thank you, readers, and all your comments.
http://contemporaryhorizon.blogspot.com/2012/07/chm-4-30july-august-2012.html

We are a part of the 1969 class of Kanagawa Prefecture Yokohama Tateno High School.

Except two women above, I' ve met for the first time after 43 years.  It was a pleasant surprise that Q-ko called me yesterday in between my ballet and kana shodo class.  They were having a planning meeting for upcoming class reunion.  I've never been there before.   Maybe, next one, I would. 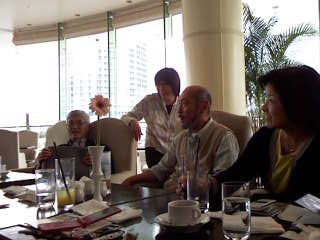 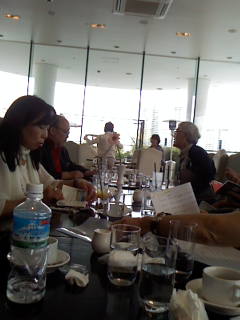 Posted by keiko amano at 4:25 AM No comments: 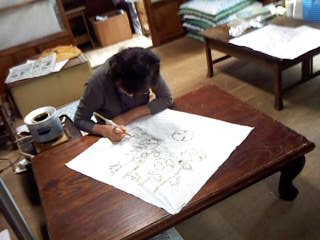 I went to see my relatives on Sunday.  Haruko san invited all of us for this day filled with adventure and fun.  First, we tried color and dyed technique.   Inoue san is related to Haruko san through Haruko's husband.   Here, she is tracing the design of poppy using hot wax.  She was art major.  I could tell. 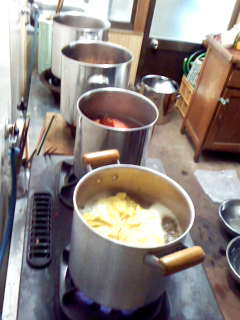 four colors lined up boiling
you can take your cloth out whenever you want. 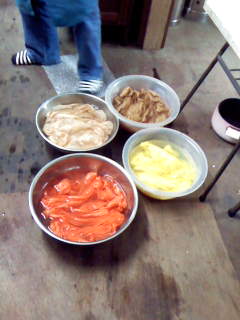 I have no intention of teaching you how to color dye a silk cloth because I was mainly watching the process.  It was a lot to do. 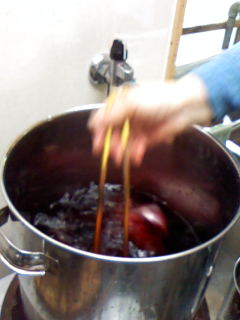 A cloth in purple dye.  It turned out deep purple. 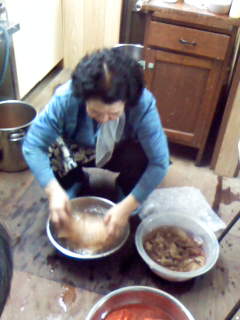 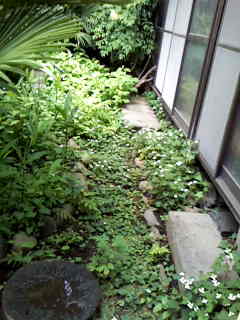 This is the front garden of Haruko san's workshop building.  The structure is old Japanese wooden house which she preserved for her workshop.  I thought it ideal place for it. 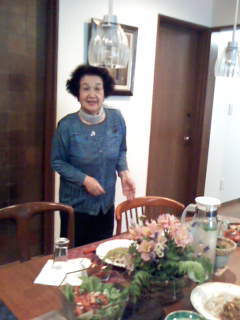 Somehow, I lost a bunch of photos between the top photo to this lunchtime photo.   It's one of my mysteries.  From Yokohama to her house in Takasaki city in Gunma prefecture took me about three hours.  I was late, so I had no time for breakfast.

Her daughter made us Indian curry, tomato salad, and pickles.  I love to eat tomato in Japan.  They actually have the flavor of garden grown and sweet tomato as my grandfather and I used to grow.
They were so good.  Herbs were from her garden. 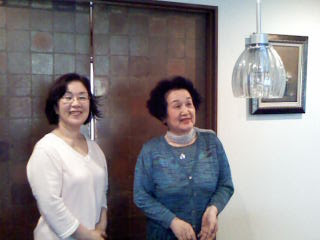 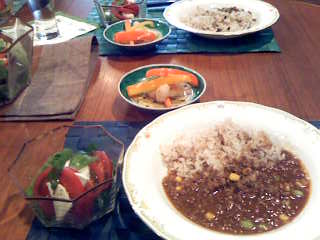 Akiko san made us this gorgeous lunch. 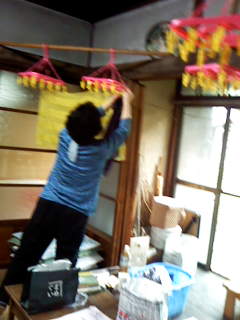 Back to the workshop.  Haruko san is hanging a deep purple silk stole in front of a yellow one.
The colors are called kusaki-zome, all made out of woods and plants. 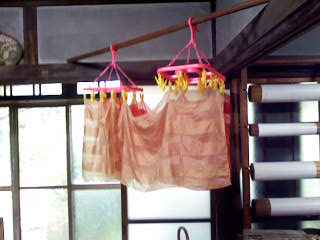 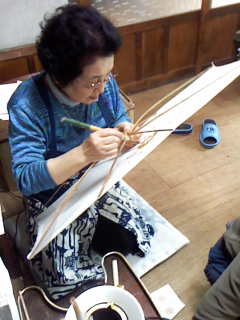 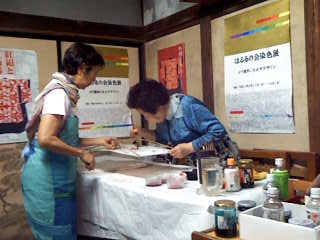 Fumiko san had completed drawing four designs using wax before lunch.  Here, she paints one of them in various pink.  That design is cherry blossoms. 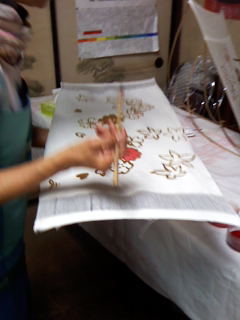 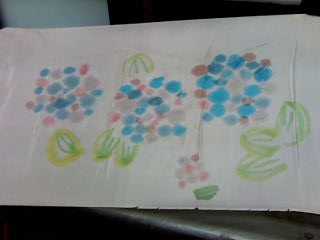 "Color me beautiful," the white silk cloth says to me.
This is my rainbow hydrangea bush from my childhood. 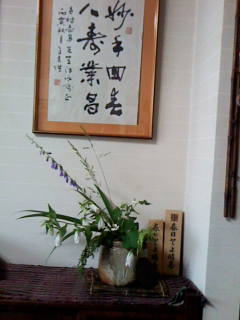 After the workshop, we went to Haruko san's home for tea. 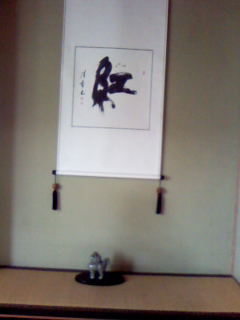 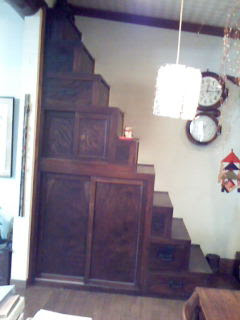 Their old okura (warehouse) was replaced by their current buildings, so the stair case was saved and put it in Haruko san's house.  This is my favorite.  I saw this once when they still had the okura.  The stair case made of cabinets. 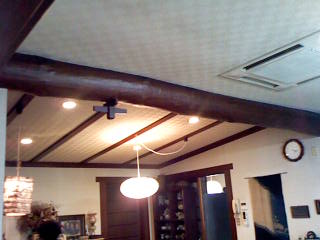 This is the beam from the last okura they had.   It now occupies in the living room of Haruko san's home. 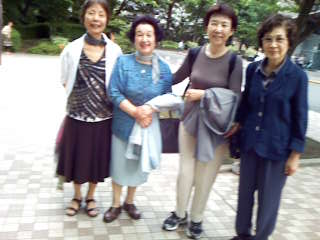 At 5 pm, we went to see an opera concert.  At the intermission, we came out, but didn't go back!
It was hilarious how it happened.  The MC spoke very fast without any stops, so often I didn't understand what he said.  I could not laugh with his jokes.  Fumiko san and I thought maybe because of the cultural difference we didn't enjoy it.  Perhaps, we've been in the U.S. too long that we became less Japanese.  But the other two disagreed.  They confirmed our point of view.

That wasn't good performance period.  After that, we, four critics of art and culture, debated what went wrong with that performance.  And our discussion became heated on what was wrong with current issues related to Japan.  I thought it interesting that Haruko san pointed out that presentations were the key, and artists needed to pay attention to all aspects in details.

I said interesting because that used to be a common sense.  Okay, I won't go into detail. 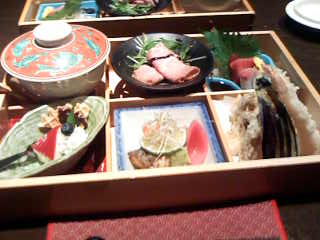 So, we continue chatting through our dinner. 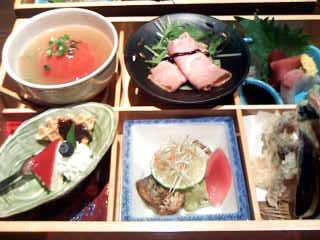 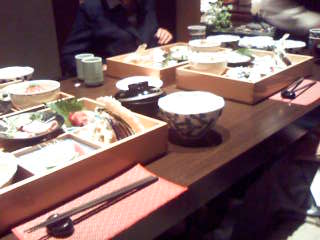 As I ate my tempura, I found a piece of squash with a cloudy spot.  I peeled it because good tempura supposed to use thin batter, and when deep fried, the surface should give  a bit transparent look.  That way, we could see the content and know what we are eating.  Sure enough, white flour came out in a small chunk.

As I said, we were all critics.  I let you imagine our conversation after I showed the white flour on my tempura.  My son would hate me do this.  He would say, "Don't complain.  Just eat it."   But courageous and fine Japanese critics are the people who care and take responsibility for the situation and the future of Japan.  Inoue san is a long time patron of this restaurant.  She cares more than I do.  She had a waiter bring my piece of squash tempura back to the kitchen, and eventually, we received another set of tempura dish and a plate of beautiful assorted pickles.  The pickles were good.  We ate them.

But the tempura pieces were too well done this time.  The batter looked transparent that I could see no cloudy chunk, but this time, all the pieces were brownish and hard like pencils!  We didn’t complain.  We laughed about it.


Nobody ate the dish of tempura, but it was good enough for next day for a different cooking like Tendon (ten means tempura, and don means donburi which is a bowl of rice) with special sauce. No-nonsense Japanese women would not waste food.  I was wondering what they would do because in Japan, we do not ask for doggy bags.  I've never seen anyone asked for it.


Haruko san pulled out a plastic bag from her purse.  I was impressed!  I am so proud of being a member of our relatives. I was very impressed with all three women.  We weren't blood related, but I felt close to them.  I felt powerful!