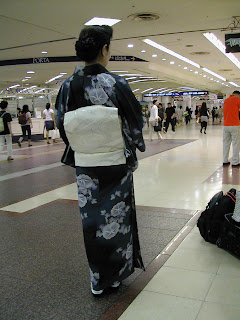 I can’t help it, but I spotted a gorgeous summer kimono before I left Yokohama. The woman in the photo was in front of me going down in an escalator. She is an instructor of kouta (a traditional form of Japanese singing) and shamisen (three strings). Maybe, I should create another blog spot just for kimono. 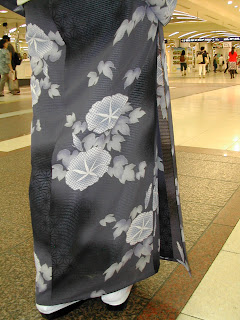 If you look closely, you can see through. The top left, you can see a geometric hemp-leaf design beside a morning glory. The hemp-leaf design is very popular classic Japanese design, and I love it. But about ten years ago, I found out that hemp was a family of marijuana plant. So, I used to give this interesting information to Japanese hoping to surprise them, but nobody reacted to it. They were probably annoyed with that information. Well, I’m not going to censor it on my blog. 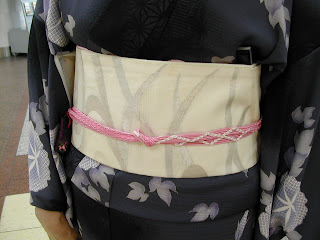 Do you see a small fan sticking out from the top right of her obi? 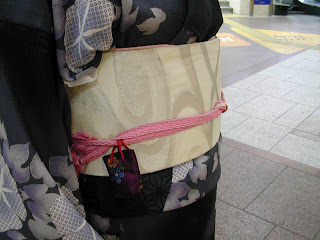 Above, a small embroidered pouch of fragrance is hanging from her pink obi band, and a light pink obi-scarf shows a little at the top of the obi. 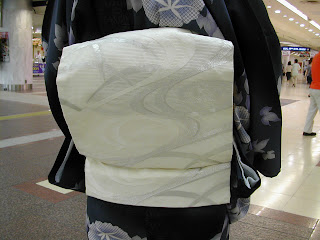 A summer obi. The design of water flowing and bent pointed leaves
Posted by keiko amano at 11:17 PM 9 comments: 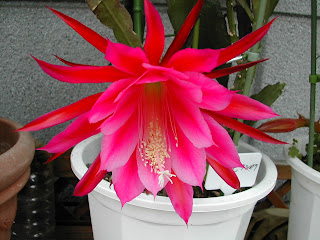 This is the photo I promised Rebb before. On the way to the library, I often stop and chat with a woman. She tends her garden, and we love to chat about flowers. That day, we were excited for this red flower. I used to grow this kind, but I don't remember the name. It blooms only one day and dies. It's stunning.

Below, these flowers are still blooming at the library. I took these photos about the same time Rebb showed her similar flowers. "Blue Jewel" or "Love-in-the-mist." 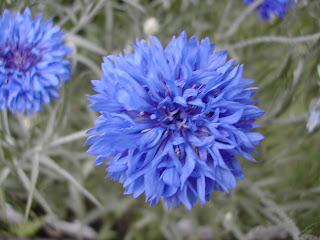 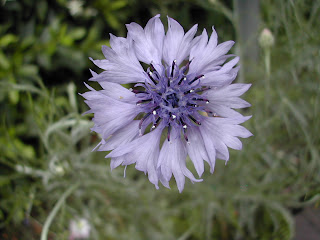 Below, I found these water lilies and fish in front of a noodle shop. When I was small, many people placed a ceramic container like this way next to their front door. It is so peaceful and enjoyable to watch medaka swim under and around water lilies. I just looked up the name of the fish in the English dictionary. They are called medaka, killifish, or cyprinodont. Thank goodness, it is called the same as Japanese, medaka. Other two sound horrible. A medaka is pinkish and cute. Me means eyes, and daka, high. Their eyes are large. 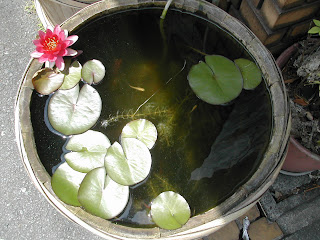 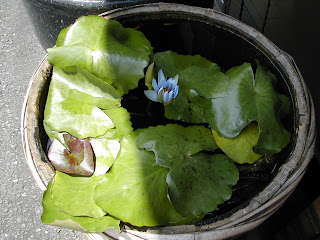 Her Hands and Flowers 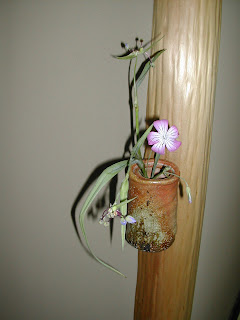 This isn't a good angle to take a photo, but you can see a muginadeshiko flower well. These are indigenous summer flowers. Tuyukusa used to grow all over our garden like weeds, but in Los Angles, I bought a pot in a large nursery. 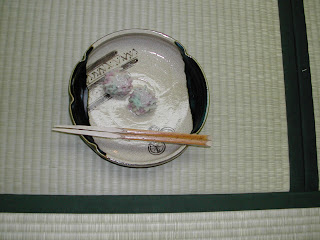 The name of these sweets is hydrangea. It's pink, purple, and bit blue. The ware is oribe pottery with dark green glaze. 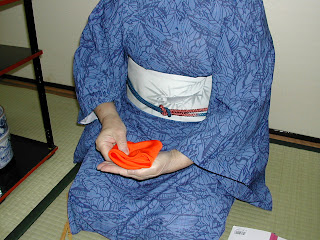 I love the way the teacher's hands move. It relaxes me while my spine straightens by itself. Their hands always look roundish and move in the most economical way. It's perhaps the most ordinary skill to achieve, but it takes so many years of practice. 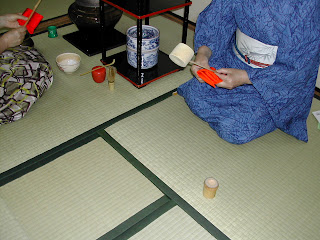 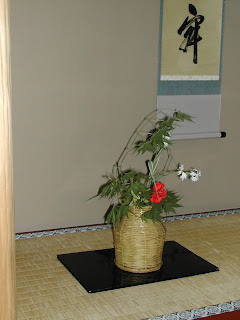 In a separate tea room, the flowers were arranged in a basket and placed on a lacquered board for a contrast and formality.

The flowers in the photos are all indigenous to Japan, but in the cities like Yokohama, it’s more difficult to find them nowadays. So ocha practitioners grow them in their gardens. I mentioned this before, but because we burn a fragrant wooden chip like agalwood in an ocha room just before guests arrive, we use only the ocha flowers which are selected for no fragrance.

I love gorgeous western bouquets of flowers in western settings, but in ocha rooms, simple and less are more effective.
Posted by keiko amano at 7:40 PM 14 comments: 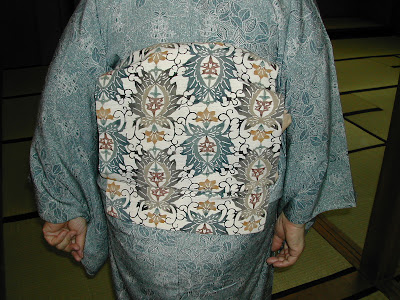 One of my joys in living in Japan is to see kimono. Good kimono and obi are arts. I enjoy the designs and the contrasts that obi and kimono make. The Japanese colors are basically all come from the indigenous plants. The dyeing technique is called kusaki-zome. They are very vivid and beautiful.

In wearing kimono(no singular or plural form in Japanese), the contrasts are enjoyable to look at such as different colors, dark vs. light, small prints vs. large prints, natural motif vs. geometric motif, and dyeing or printing textile vs. woven textile. There are rules to wear kimono, but they are common sense for traditional artists. One rule is not to wear hand-woven textile kimono with a hand-
woven obi. If we wear a kimono of hand-woven material, we wear an obi that went through dyeing or printing process, and vice versa. That’s an effective contrast in texture.

But nowadays, the strict rules do not apply. Many kimono lovers break the rules and enjoy their kimono. I forgot her name, but a young woman with PhD in arts has been making geometric designs using the computer graphic. Her kimono and obi are both geometric although the designs and the size of the designs vary. So, people try all kinds of things to challenge the tradition, but the classic designs and the way to contrast among an obi sash, a kimono, undergarments, linings, a band, an obi-scarf gives kimono lovers immense pleasure. It’s fun to plan the combination as well as just to look at.
Posted by keiko amano at 10:59 PM 4 comments: 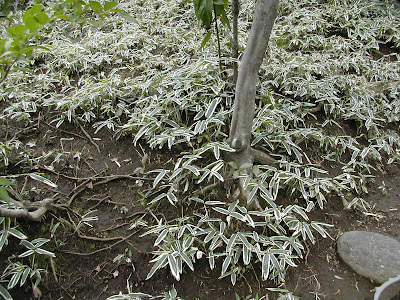 This photo is the one I promised Rebb in one of my previous blogs. We Japanese call it “sasa.” The root meaning of sasa is small. We don’t use it by itself, but when I say, “That’s a small thing” in Japanese, I would say, “Sasainakoto（些細なこと）.”

So, this is like a sasa. I was alone in a small café. Two men came in and sat at the table behind me. A waitress rushes back and forth. The men and the waitress seemed to know one another. The men talked about their work, and one of them said something like this: “Chinese are buying the lands in Hokkaido, and Koreans, Tushima. They have a law against Japanese to buy their lands, but we don’t have such law.”

It reminded me of a similar situation back in ’80s. Japanese businessmen were buying the tall buildings in downtown Los Angeles. The headlines and photos on the Los Angeles Times flashed through my head. The other man said, “We should get together and be one.” The tone of the men’s voices was even. I thought it good idea like the EU. It would be excellent if N. Korea disarms and joins. Let’s focus on Peace.

Later, the waitress brought the men drinks and joined their conversation. She spoke louder than them about a celebrity they mutually knew. I tried to read my book by Suzuki Daisetsu, a Japanese philosopher, and waited for a second cup of coffee. The waitress was the only one in the café, and the book was fascinating.

The waitress went on talking. Then, she lowered her voice and said, “This might sound a racist thing, but…I learned that so and so is a foreigner, did you know?” The men said nothing. “The mother of so and so is also,” she went on talking about more celebrities. I kept my eyes on the page. I didn’t turn around.

So, I thought about it and concluded that the people the waitress mentioned must be Japanese. Otherwise, they wouldn’t have held their current and past high posts. Well, I’m familiar with the American minorities’ struggles, but the difference is that we look alike. I don’t see anything wrong with talking about races, but not in a negative way.

I used to think the negative way of talking about races was vague. Now, I think it is quite clear. So, if the café conversation were a straight, thoughtful talk, I would have turned around and joined the conversation. With straight talks, I don’t think we need to lower our voice, or to avoid responding to questions or facing the speaker.

Out of the conversation in the cafe, I thought the waitress used to work in a publishing business, and the men seemed to be journalists. I turned around and asked the waitress for the second cup which I had ordered with my first cup because no refill was available. She said yes and smiled. (In Japan, many waitresses do not come to our table and ask, “Is everything all right?” This is annoying.) Anyway, the waitress returned to the back of the counter and brought me a coffee in a new cup and saucer. I sipped coffee, took out my pen and papers, and started to write. The men stood up, went past me, and left. Another waitress came in to the cafe and wore an apron. I kept writing. The head waitress whispered something to the waitress who just came in. I wondered why she began to whisper, but after I heard a few whispering talks, I put back my pen and papers into my bag, paid my check, and left the café.

Going back to the low growing bamboo, Sasa is written as 笹 in kanji: The top part of the kanji means bamboo, and the bottom, a world. Thank you for reading to the end.
Posted by keiko amano at 7:00 AM 6 comments: 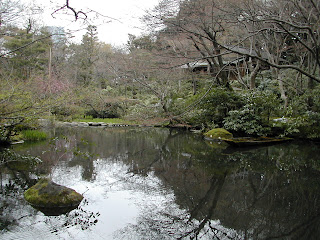 This is a blog about accents, but first, I want to show you the photos I forgot to show a few months ago. I went to Nezu Museum in Tokyo. The museum is famous for their collection of tea utensils and garden. The main building was remodelled recently. I prefer the way it was before, and the way they used to display. But like accents, even architecture and displays are changing. The new design leans more to western-style, I think. The above photo shows a tea house on top right. 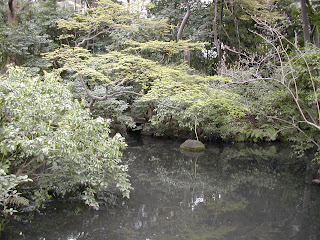 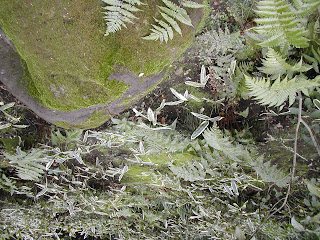 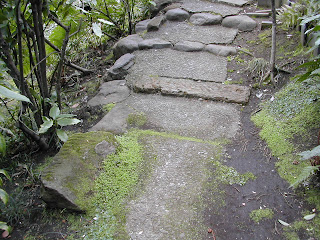 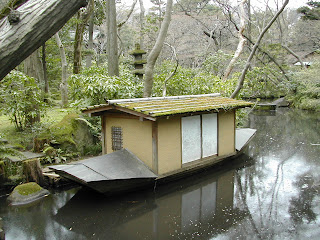 The photo above is a tea boat for two in the pond.

Anyway, this is a blog about accents. The other day I happened to find a blog written by Susan Brown of Red Room. Here is the site: http://www.redroom.com/blog/aninnymou/adios-arizonans,
and my comment follows.

I enjoyed reading this post. It’s hilarious. But it’s true that we are all masters of our own language.

This afternoon, I was at the “Sakuragicho” station in Yokohama. When the tape ran for announcements in the car, I heard the same native Japanese speaker pronounced “Sakuragicho.” The speaker has a weird accent. This drives me nuts. A funny thing was that I noticed today that on the same tape, “Sakuragicho” in the English version was closer to the standard Japanese accent. It was ironic that the English speaker had an American accent.

From ministers to announcers on television, most of them, even though they were born in Tokyo or Yokohama, have accents. The other day, I went to listen to an amateur French-songs concert. All performers and audience were Japanese. And one woman was singing about “Wasi (Japanese rice paper).” I didn’t know why she was singing about Japanese rice paper. I thought it odd. Later, I read a pamphlet and found out that she was singing about eagle. They are both wasi with different accent. I told a friend of mine about it who went with me, but she was quiet about it. I think she didn’t notice. Japanese ears are trained not to notice differences in accents. That was a big issue a few years ago when I gathered a reading group for my play.

Anyway, the day after the concert, I talked with the organizer who is a friend of mine. She invited me to the event. I told her about the French song and pronunciation of wasi. She said she was busy, so she didn’t notice it, but that singer used to be a principal of a school.

After 35 years away from Japan, the language has changed so much. And whether I like it or not, if the majority sings “rice paper” to mean eagle, that’s the way it will be.
Posted by keiko amano at 6:18 AM 6 comments: