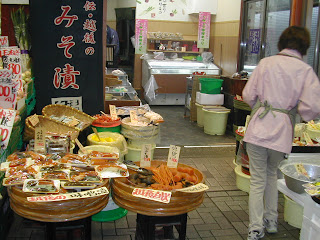 I was a freshman in high school, which was a 45 minutes travel by streetcar.  I had chosen the school on purpose.
During one class break, two girls in front of my desk were talking about the Gumyoji shopping arcade.  To me, the arcade is not an interesting place because it’s very close to my home.  I rather go to fashionable Motomachi or Isezakicho shopping streets.  My streetcar pass let me get off at the two streets.  That's why I had chosen my school.  Anyway, both girls made a meaningful smile to each other.  I was curious.
“What are you going to do there?” I said.
“We are going to the pickle shop,” one of the girls said, "to look at a man."
“A man in the pickle shop?  Oh, he is a friend of my brother.  He has probably been practicing judo with my brother.”
“Really?” the girls said.  They both looked excited.
I told them his last name, although I don't remember now.  The girls were grateful.
“What are you going to do there?” I continue.  “What pickle do you buy?”
“We go there every weekend to peek at him.  He isn't there during week.  He is so handsome!”
“You mean you go all the way there just to look at him?”
They both giggled.  They lived pretty close to the school unlike me.

Anyway, since then whenever I passed through the arcade, I look at the shop. Long ago, I was sure he was a friend of my brother.  They went to same high school as well as junior high school.  There were a few periods in my life I was unsure, but last eight years or so, I thought the man I saw in the store was the handsome man those girls had talked about.  He looks okay to me, although not my type.  He looks like Ishihara Yujiro.  Yujiro was so popular long ago like Robert Redford.  They both are not my type.  This kind of things is subjective.  Besides, this was the way I felt when I passed by the shop and looked at the man more than 40 years ago.  He looked okay then, and he still looked okay to me.
Today, I gathered my courage and asked the man if I could take photos.  He said yes for his shop, but not his photo, and then, he hid behind the shop.  I told him about my brother and his high school name.  He told me that he didn’t go to that school, his family took over the shop many years ago from his relative, and his last name and the relative's are the same.
Hmm, I thought.  His last name wasn't familiar to my brain.  I don’t remember the name, but if he told me my brother’s friend’s name, I’ll recognize it, I think.
Come to think of it, there was one more pickle shop in the arcade, and maybe, long ago, there were more than two.  I'm unsure now.  All the shops were family-own, so teenage children used to help out parents in the afternoon or weekends.

In the evening, on the way back from my errand, I walk through the arcade again, looking around and inside the shops that I used to visit when I was a child.  The clock shop was also closing, and inside the glass door, a familiar face smiles at other familiar face.  They must be my classmate’s brother and his son.  They all have the same looking eyes and noses.  That classmate sat next to me in our third grade class. 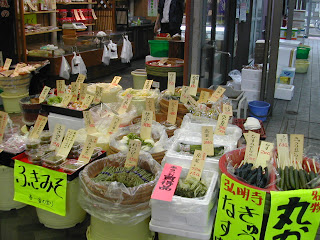 Posted by keiko amano at 7:50 AM No comments: 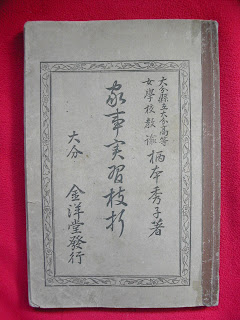 I received this book in the mail today. To make a long story short, this book was written by one of my female ancestor. I'm so excited. In the Meiji period, Tsukamoto (or Emoto or Enomoto) Hideko had taught home economics at Oita Girls High School in Kyushu, and in 1918, she published this book titled "Home Economics: Practical Application and Techniques."

In the book, she stresses to young women not just to follow our tradition blindly, but consider scientific studies and apply the result on their housework. I'm quite surprised to find the author's progressive idea. Wait, no. Actually, it makes sense why the way my mother was. She was also in some way progressive. The author lists some recipes of western dishes and shows how to make them. And the first one is the Worcestershier sauce. Wow. I didn't know the sauce until I went to the U.S. for the first time in 1970, and it took many years for me to pronounce it correctly.

The photo showing a Japanese woman washing laundry standing was quite progressive advice in 1910s.
Even in 1950s, women were washing laundry with their knees on the floor. 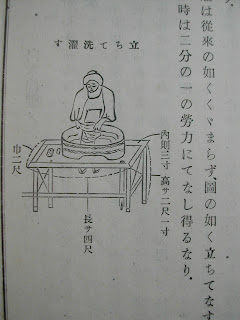