Thursday Meeting Before the Last 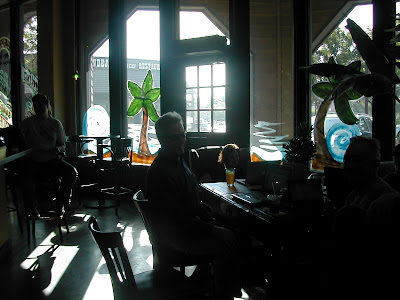 Coffee House Writer's Group -  Two Thursdays ago, it happened to be a small group, but it was a good one.  Last Thursday, I heard they had a blasting sex scene workshop.  It was so hot that they could not upload their photos. 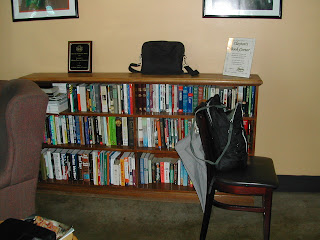 The corner of the meeting area, now we have a small library.  This is a huge cafe. 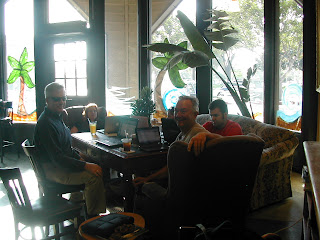 His hand on the back of his chair, Cliff is smiling at the camera.  He is an assistant organizer.  He sends us a Cliff's Notes after every meeting.  His recap of all the stories is helpful especially for me.  It's always a pleasure to meet people there.  I learn something.  I think they are all competing to surprise me.
Posted by keiko amano at 5:00 PM 2 comments:

A Journey Interrupted: Being Indian in Pakistan by Farzana Versey 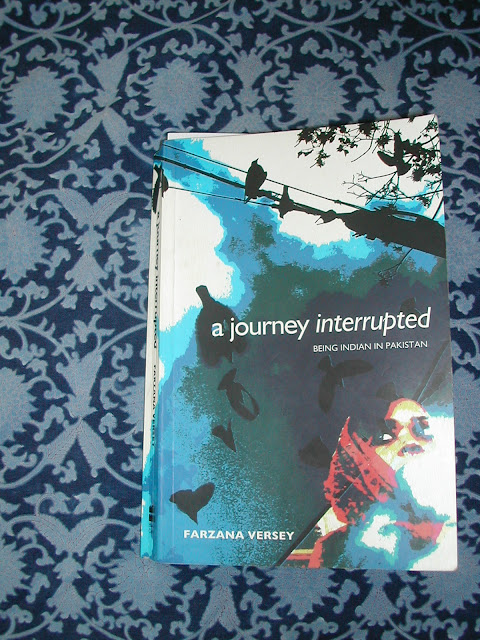 It took three weeks to receive this book, but it was worth it. I was very excited to read and finished the book. I truly enjoyed it.


Through the scenes and narrative, I felt closer to the characters and situations although I didn’t even know any of the Pakistani writers or other well-known people in India and Pakistan. But, all the more, the narrator drew me into her world. This reading was truly special to me. Out of all the elements, politic, religion, history, travels, and personal accounts, I trusted the narrator’s wisdoms and sensitivity in language.

From this book, I learned many facts. First, I knew many Muslim people live in India, but I didn’t know more Muslims in India than in all of Pakistan. I thought most of the people I know probably didn’t know that. And I was even more surprised to find that 3 millions Hindu people live in Pakistan. I thought to myself, “What a simplistic imagination I used to have!” Second, Goa, India, was occupied by Portuguese until 1961. That wasn’t too long ago.

About the terms the narrator used, I thought them interesting, such as atheist Muslim or secular government because I thought governments are to operate independently away from religion. Obviously, I’ve been taking this kind of things for granted because I’m Japanese. So, reading this book, I started to understand the needs of such terms even though I understood the narrator was against labeling. It made me think.

About Urdu, I enjoyed reading dialogues. Even though I don’t know the language at all, I read each dialogue with much interest. I appreciated the narrator’s deep knowledge of the language and culture.

About honesty, the author/narrator’s voice seeped through, and I just loved when her honesty spilled humor. It was like Flannery O’Connor, my favorite American author. The narrator made me chuckle more than a dozen times, but I would give just two examples. On her first visit to Pakistan and about to be deported, her Pakistani driver says, “When you return home you can at least tell people you saw the best sight in Karachi.” Haven’t we all had such experience? Then, the narrator says, “I did not know what I had ‘seen’ since my back was turned to it.” I imagined the seriousness of her situation, a famous ancient site in Pakistan, and the driver’s concern for tourists, I started to giggle reading late at night. Second example, a fortune teller said to the narrator, “Men will cause you troubles.” She said, “You could tell this to any woman in any part of the world and she would agree.” Ha ha. I couldn’t agree more!

I learned a lot from this book and very satisfied with it. 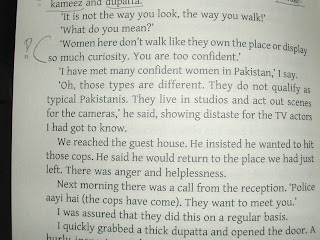