“He was like a god,” my aunt Ruri said about my great grandfather. “After we returned from Shanghai, we lived with him.”

His name was Yamada Kikan, also known as Norichika. He was born in 1861, and at the age of four, he was sent to a special school away from his mother. How lonely he must have felt. He was a descendant of a samurai. He has been my most interesting ancestor, but not in a spectacular way. He was a pillar rather than a center of attention. All his family get-together photos, some of his relatives and friends drew more public attention than he.

“Our ancestor went to Kyoto with Nitta Yoshisada after the fall of Kamakura Government. It probably took a long time to come back home after their defeat,” my grandfather said to my mother about a 14 century incidence when I was young. .

I didn’t do well in my Japanese history class. The history seemed to be emperors after emperors and wars after wars. My favorite classes were Modern Japanese, Japanese and Chinese classics, and English classes.

So, in 1993, when my mother started to tell me about our ancestors, I guess I couldn’t digest her information well. That was after she had an operation for her liver cancer. She spoke about my great grandfather and probably a few relatives, and she used the words such as “commander,” “chief,” or “commander in chief.” For me, military titles and sections are not easy to understand or remember, so I’m insecure to translate those words.

I wrote some information down. The great grandfather had gone to the Russo-Japanese War, and in his last battle at the 203-meter-hill, he was shot through his upper left arm while all high ranking officers died. He was a shosa, a major.

A few years ago, I went to the military library in Shinagawa and copied a few pages from their records, and made a visit to the Shinagawa district public office and obtained the family records. I saw the name of the great grandfather’s father for the first time. The man lived in the Edo period. There was not much I could do to find more information, so I read the first edition of Russo-Japanese War written by Hiratuka Masao. In the book, I found his name and the title, daitaicho. I looked it up in my dictionary, and it said a battalion commander. I thought he was promoted to the commander from shosa. Dai of daitaicho means big, and sho of shosa means little or small. I was confused.

He was the head of his extended family. In those days, the children of samurai families married a member of other samurai families, and the first born followed the footsteps of his father.

In the 70s, Kashin written by Shiba Ryotaro became the best seller. My mother had told me that my great grandfather’s elder sister was married to the only son of Yamamoto Hanya who appeared in the novel. He was the head of the Hamada Clan. She said he committed hara-kiri in their flaming castle, and the author described him as the last samurai. With this dramatic piece of information, I became interested in the Japanese history for the first time. I went to a Japanese bookstore in Little Tokyo, bought the book, and read. She was right. But recently, I’ve researched on the Web and found out that the Hamada clan didn’t have a castle. I think my mother probably believed the scene in the novel. My mother died in 1996.

A year ago or so, I put my great grandfather’s name in Google search, and found a match. It was a Shiba Ryotaro related site. The author wrote Sakanouenokumo which is about the Russo-Japanese War. The description I found was the characterization of Akashi Motojiro as follows.

“On the day of a celebration, Yamada Kikan goes to congratulate Akashi on his new post, the 7th governor of Taiwan. After the celebration party, Akashi invites Yamada to his hotel room, and they talk until very late at night. So, Akashi asked Yamada to stay over, but he had only one bed.”

I think they eventually got an extra bed from somewhere, but I think my great grandfather wanted to compliment him for being hospitable and unselfish. He was two years older than Akashi. Anyway, I was surprised to see my great grandfather’s name on the Web.

Then, just three weeks ago, I made a visit to my aunt in her convalescent home in Santa Clarita. My cousin Kenneth picked me up, and first we went to his house and talked. While looking at their photos, he told me that the last commander in chief of  the Kwantung Army during WWII was our grandfather’s cousin.

I wonder why I didn’t know it. I returned home and researched on the Web. Japanese Wikipedia shows Yamada Otozo was from Nagano Prefecture. I thought all my relatives on my mother side lived in Tokyo. So, I asked Kenneth to confirm with his mother on this point. She has dementia, but she remembers her past details well. He came back with her reply. Yes, he was from Nagano prefecture. I guess the family was more wide spread than I thought. I probably failed to catch the information from my mother and aunt, but Kenneth has a military experience. He is a Vietnam veteran. 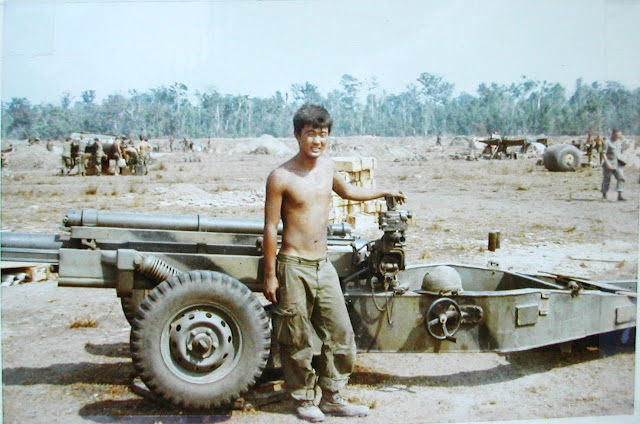 Kenneth Maeda was at FSB Illingworth on April 1, 1970 when it was attacked by the North Vietnamese Army.  His unit was B-Btry 1/77 Artillery, 1st Cavalry Division.  Kenneth’s father was a civilian employee of the U.S. Govt. in Japan after WWII (not an air force man as I wrote before) and worked at the same type of job in Korea after the Korean War.  And Kenneth’s nephew, David McDowell, served the Iraq War.  That’s the American side of our family. 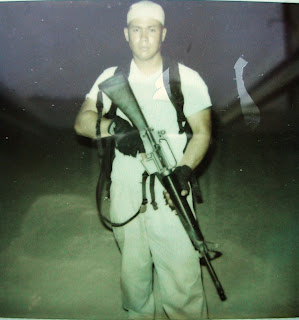 Back in Japan, my father was a first lieutenant in WWII. He must have known the name of the last commander in chief and the relation to my mother’s family. My grandfather was the third son, and he was an engineer and entrepreneur, but his eldest brother followed his father in the military career. He was a taisa, colonel, of Artillery division, but he probably retired way before the end of WWII. He was 11 or 13 years older than my grandfather. The second son was adopted by Yamada Kōrin or Hirotomo, a military doctor and a lieutenant general. I think he changed his last name after he adopted the baby. In the family record, the name of the first son was written as Issei and the second son as makizo. Issei has the meaning of the first, and makizo, the third. Their cousin, Yamada Otozo, returned to Japan from Russia after 11 years there.

I wonder how my father felt when he heard the news. “The war criminal returned from Siberia after 11 years.” I calculated the years. My grandfather came to live with us in Yokohama shortly afterward. Before the war, families were large, they helped each other, and they had a large get-together every New Year. After the war, families became like our nucleus family plus a grandfather or grandmother.

My family lived together under the same roof and ate our meals at the same table. But I had never heard them discussed about the war, war criminals, or Siberia. My father and grandfather didn’t talk much to each other. I only saw them greet.
Posted by keiko amano at 1:23 AM 14 comments: 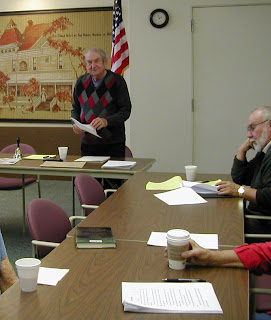 This is one of the writers’ workshops in the San Dimas Senior Center.  I took these photos last Wednesday.  Al is the chairperson while Pat is away.  She isn't here right now, but is behind the scene.  Last Wednesday, Al gave me back my first draft of "Estimates" with Pat's comment.  I must have read the story to the group probably last September!  Thank you Pat and Al. 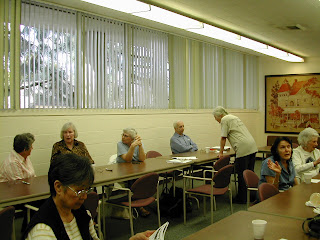 I don’t know if this scene was before or after Frank shared his jokes of the week.  To understand jokes indicates a high achievement in learning a foreign language.  I often miss it.  I wish I could get a print copy of his jokes.  But I won’t because if I read them and still don’t laugh, we both will be disappointed. 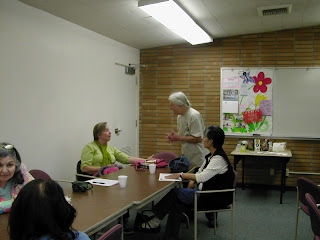 We had about 15 people last week. The recess time was as enjoyable as the reading time. Dolores Cullen, a Chaucer expert and my editor, said guests are always welcome, so a friend of mine, a lady in green, came along with me because Wednesday is our fish taco day.

On this day, I began talking about races and our roots, and we had a heated discussion on cultural taboos. I was thinking of sending my story “The Night” to a nonfiction magazine, but because of their input, I had an opportunity to think further about it and deepen the story. I always appreciate honest opinions much more than any praise. Otherwise, I can’t improve my writing and myself. 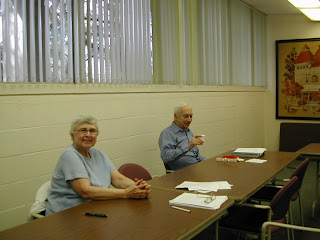 I think they had told each other what color of clothes they would wear the following week.  Saundra heads her memoir workshop at the same center.  Frank’s play will be in production this May. 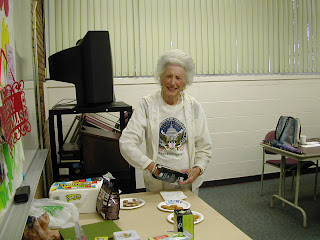 Here is Nonie, our madonna.
Posted by keiko amano at 9:30 AM 3 comments: