Edo Tokyo Museum is showing a special exhibit on Edward Morse’s collection.  From 1877, he visited Japan three times for total of four years.  Four years seem not enough time to learn Japanese culture, but it’s amazing how much he observed and collected Japanese utensils.
http://www.edo-tokyo-museum.or.jp/english/special/201309/index.html

It was a strange experience, to be honest.  Museum viewers came in and looked at similar items with which I grew up.  It wasn’t that long ago.  No kidding!  We were using them in my house except the items for painting teeth black.

A one-sided-blade knife was in a showcase with a stone to sharpen it.  Its label said the knife to cut fish.  It was small.  It must be appropriate size for most housewives then.

What I appreciateed most was children’s smiles in the photos.  I don’t know if Morse took those photos himself or not, but I’m sure he made them laugh.  That’s a big contribution for his work which he tried to depict day to day Japanese.

Before I left the museum, I went up to the sixth floor and browsed their regular Edo exhibits.  I took off my shoes and went up to a wooden house like the one I grew up in.  I came out, and I was about to leave when I heard a couple speaking in English.  A man said, “Is this a school?”  So, we chatted a while.  They were from New York.

7:30 pm was closing time.  I headed to the station.  It was dark and no people around.  The location is the middle of Tokyo and very lonely looking place, I thought.  Gee, similar house in which I grew up was in the museum already!  This is a weird image.  Unfortunately, many young Japanese haven’t had experience in living in such house and even older people, too, never seen some of those utensils that Morse brought back to America growing up.  Right now, I have a renter in my wooden house, but I must preserve it.  I don’t want it disappear.  So, this is usually my problem, but yesterday, I reconfirmed that it is my happiness.
Posted by keiko amano at 7:57 PM No comments: 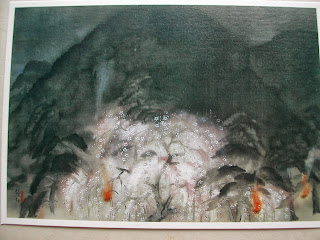 These are my photos of the postcards I've purchased at Yokohama Museum last Tuesday.  The exhibit focuses on Yokoyama Taikan's art, but the first painting is "Night Cherry Blossoms" by Tomita Keisen, one of Taikan's students.  I like it so much for many reasons.  Under the painting shows a Taikan's letter to Keisen praising Keisen's talent and this "Night Cherry Blossoms."  How refreshing Taikan must have felt for the first time he saw it.  Today, we can see light-up cherry trees everywhere, but not early 1900s.  Nights were dark then.  I appreciated the letter.  I felt his personality behind the dynamic and innovative art. 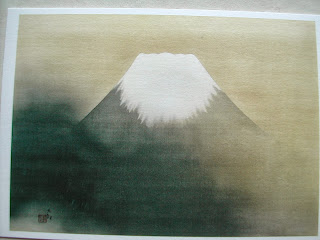 Taikan is a huge, national artist, and even at the time, he was especially to all the accomplished artists led by Okakura Tenshin.  I've mentioned about Tenshin many times, but if you love Japanese traditional arts, please read "The Book of Tea" written by him in English.  Taikan was also bilingual.  Other three pictures are by Taikan.  Taikan literally means "Big Picture."  He certainly lived up to his name. 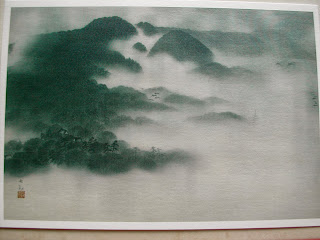 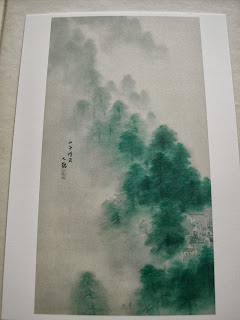 I'm sure the story is nothing you would expect, so I won't give out the story here. But I bring it up because I see an element of coincidence in the recent news: Japan's place in OECD's literacy and numeracy tests.

In the beginning of the story, the narrator points out the difference in the definition of "literacy" between ODE and Japanese English dictionary.

I hope you are intrigued! 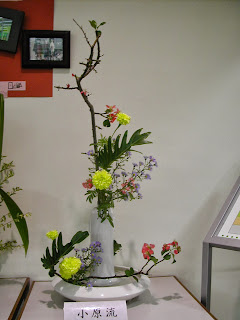 At the entrance of Yokohama Asahi Culture Center, three flower arrangement schools show one display each. Out of three, I happen to like this design. The name of the artist is unknown, but as you probably can imagine, the artist is not a novice. It might look easy to arrange those flowers and tree branches, but no, it's hard work. Much details and discipline are behind it. For that, I appreciate any work of arts.
Posted by keiko amano at 8:06 PM 4 comments:

Labels: "Literacy and Race" a short story, Literacy and Numeracy, the difference in definition between ODE and Japanese English dictionary 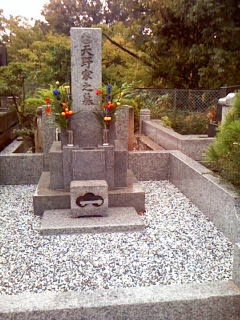 Last year, this grave stone fell down because of repeated earthquakes and old deteriorated granite base. This is a new look.  The base and the fence are now all marble, and the ground is covered with fine gravel. It's simple and clean, and easy to maintain.  My brother has done a great job.

It was raining, so I had a shop employee light up a bunch of incense.  I carried it like a torch climbing up the stairs.  My eyeglasses steamed up. I stared at wet screen of my cell phone and clicked.
Posted by keiko amano at 7:05 AM 2 comments: