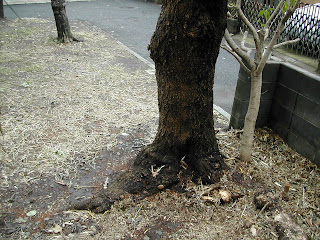 Yes, we can kill trees. And I’ve been trying to kill a tree. I am a murderer of the weeping cherry tree. I’ve been trying to kill the tree in slow death. I’ve contracted out the killing in three occasions during 12 years because that tree kept showing new growth. Wait. The tree hasn’t died yet completely. You can see a bit of its life still. See the bottom photo. On top right, you can see a part of a good branch. 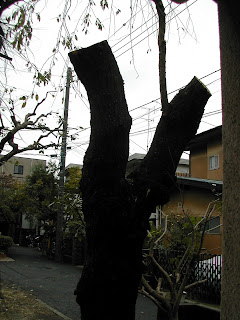 So, the mystery to this story I’m writing is not who the murderer is. That’s the mystery. It all started when Mother was lying on her death bed in the hospital.


A man came to me. I was staying at her house where I was born and reared for nineteen years. I name the man, Electro, after Electra of a Greek tragedy. There is no meaning to the naming except for convenience in writing this story. After we exchanged a brief greeting, Electro said,

“I came over because of your cherry tree problem.”

“The city paid the other half…,” he said. He had a smile on his face with the eye lids drooping down.

“This is the bill for your mother’s portion,” he said. He handed me a bill.

“The problem is the tree disturbs the electricity line. I volunteered to fix it. Your mother knows about it.”

I probably should have asked Mother before I paid him if she authorized him the job, but she was in the hospital. I didn’t want to bother her with such problem. Besides, she had tendency to pay such costs without asking questions. So, I paid it from her money. Electro went on talking about how the tree had been causing problems, and he had to do this or that for Mother. She was 76, but her mind was quite sharp. She wouldn’t ask people’s help without returning her favors. She was quite generous. Sometimes, too generous.

I thought the amount too expensive, but I was unsure. I couldn’t compare the costs fairly because I had been living in the U.S. for the past 26 years. Besides, I had no idea about what he did to fix and for what problem exactly. I didn’t see any document from the city approving or paying him the same amount. But I didn’t have any reason to doubt him. The tree was large after all.

The weeping cherry tree was Mother’s joy. Her friends and students and everyone who had seen it wanted to see it bloom every spring. Just to see the tree, many people made their visit to her house. But I hadn’t seen the flowers because I went back every Thanksgiving week. For the four years prior to her death, I went back twice a year, but I guessed I missed the flowering periods. I only saw the flowers in her photos. 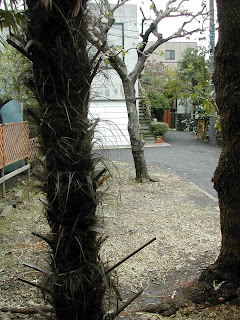 This is the current view from my window.