ZACL and Ashok in Kana Shodo 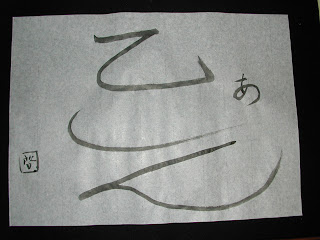 Last April, I wrote a blog titled “Hiragana in Ballpoint Pen.”  http://keiko-amano.blogspot.com/2010/04/hiragana.html
To my surprise, I had good feedbacks.  That was the reason I decided to take up a Kana Shodo class.
This morning I was inspired.  So, I got my calligraphy utensils out and wrote two more names in kana, ZACL and Ashok.  To draw ZACL was a challenge because it isn’t like Mary or Elizabeth.
In Kana Shodo, we write in kana, but we include some kanji which is called chowatai (the balanced form.)  So, for ZACL, I picked 乙 (otu) in kanji for Z.  甲乙means primary and secondary.  So, 乙means secondary.  But, when we say, “It’s 乙（おつだねぇ、or おつですね）, it means “It’s subtle, but good” or “It’s surprisingly good.”  The meaning has depth in aesthetic or goodness, and the proportion to kanji vs hiragana depends on the calligrapher’s sensibility.
I also chose あandん .  あis pronounced “a” of “a chair.”  んis pronounced similar to “n” or “m.”  According to Sanskrit, あ is the beginning and んis the end.  And I thought ん looks like alphabet L dancing.  あうん means “Ohm,” and it came from Sanskrit.
For C, I let it remain as alphabet, but I made it like a wind.  When I see ZACL’s photos, I sense a wind and the sea in the background even if the photos are taken indoors.  So, I depicted a wind and the sea by drawing; the last two letters.

ZACL, if you don't like it, I can always come up with other design.  So, please let me know. 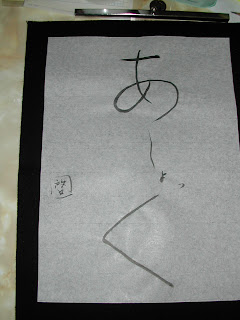 For Ashok, I simply used hiragana only. Ashok isあしょっく！
I always think of Ashok, “A Shock!”
So, it sounds somewhat logical but also idiosyncratic, right?  But I think a number of ancient Japanese scholars went through this kind of process over and over and reached the stability in the Japanese written language.  Motoori Norinaga (1730-1801) set 50 kana based on Sanskrit.  He and Ueda Akinari fought on the concept.  This is very interesting.  I hope to read more about it later.
http://en.wikipedia.org/wiki/Motoori_Norinaga 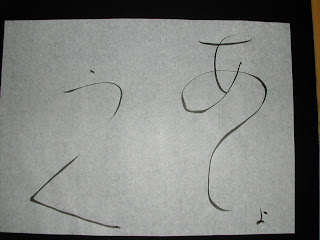 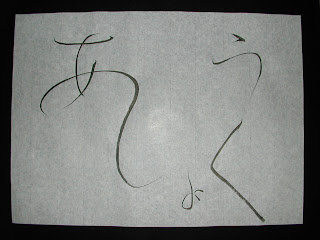 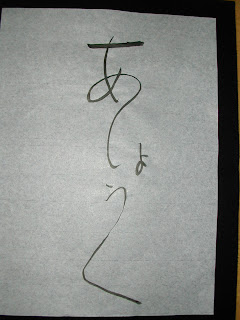 Thanks for the Kana Shodo Keiko.

The o in "Ashok" rhymes with the sound of o in cloak (or broke) rather than the sound of "o" in clock or broth.

Would the Kana Shodo be different according to the sound of O ?

I added three more of your name with う in it.
I'm sorry I thought it like "a shock" but now I got it like Ashoak, right? I wrote あしょうく、not あしょっく。 I've tried all kinds of design, about 30 times. I hope you like one of them.

If you like other kinds of design, please let me know. I can come up with better ones. Also you can choose other name.

For sure they are very elegant designs Keiko. Very elegant and also very spiritual. Thank You for the effort.