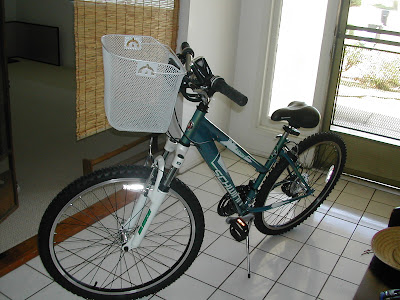 I sold my black mountain bike more than 10 years ago. I regret it. A week ago, I bought the bike in the photo. This time I chose Ladies' bike. It has 21-speed instead of 3. I didn’t think I needed 21-speed, but it came with it. I also knew I was a bit short for this 26” bike. I’m 5'3". Before I bought it, I asked a man in Walmart if 24” was better for my height, showing my small hands. He replied 24” was for kids. I nodded, but thought in Japan many adults ride small Dahon bikes. We have very little room inside or outside our Japanese homes.
Not to prove the point, but I prefer not using my garage right now. Why? Please don’t ask. I let readers make a wild and kind guess. Anyway, I park the bike inside for now. Look at the shape. Mountain bike is boyish looking. Does the attached basket look funny? I used to dislike the shape of Ladies bikes because many of them have feminine curvatures. But this bike has just an inclined but straight front bar. I hear that the Ladies bikes with curvatures—I don’t know what to call them-- are much easier to ride. It is probably so. 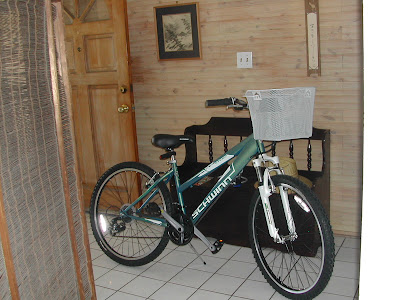 But I like boyish looking bikes, and I like my new one. The second day after I purchased, I rode it to a local market and bought a quarter cut water melon, a cantaloupe melon, a bottle of vegetable sauce called tonkatsu sauce, and a few other items. I filled them in the white basket attached to bike. Going down to the market is easy. But coming back, my gear was already up to the top of my right hand lever, 7-speed. I thought I should take advantage of 21-speed. I reached a turn and felt a bit uphill ahead. I exerted the left lever for the first time. The bike wiggled. Bang! I didn’t fight. I let go. I sat on a residential road for a while. No car passed. I knew I had just scrapes. My body ached here and there, but this accident proved to me I needed more exercises. The bottle rolled out of the basket on to asphalt, but it was fine. No crack. I needed it for my sautéed cabbage.


I've been thinking. It’s possible for me to learn how to use all 21-speed, but my body is not as young as I feel. It's better to ride the one I feel most comfortable with. The last bike I owned was also Schwinn Mountain bike. I didn’t ride that much. I guess I was busy. Wait a minute. I think I didn’t ride that bike because it wasn’t as comfortable as my childhood bike.

My childhood bike was Maruishi Ladies bike called Pink Lady. It was pink. I was a fifth grader. I used to ride it to my ballet class which was five or six bus stops away until the day I was hit by a small truck. I didn’t stop at a stop sign near my house. I was on the way to see a classmate of mine in next town. In those days, traffic education was for car drivers. Children had ridden bikes like born free. Stop signs were strangers, and they hid way above our heads on wooden telegraph poles. In the same week I had the accident, another boy in my class was also struck by a large truck. I was absent from school for 10 days or so. When I returned to school, I learned that the school started a traffic education. I looked forward to such lesson, but someone said all the students in the school took the lesson in the quad, and it was already finished. The boy returned to school after two months. He wore a casket on his arm. The boy and I missed the traffic education.

After that, a pair of women wearing yellow jacket appeared at stop signs. The term, Yellow Ladies, became popular. Shortly after that, Green Ladies sprouted and became well known throughout Japan as traffic controllers and protectors of children. 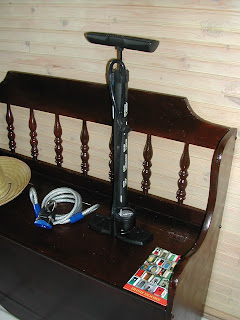 Let’s jump back to my new bike.  There is nothing wrong with the bike.  It’s beautiful, able, and good price.  A friend of mine says I can exchange it, but I hardly ever return any products.  So, I’ve been thinking, then, my daughter calls me.  She has returned from her vacation.  I say she can use the bike when she comes over.  She says yes.  Maybe I'll buy the kind of very comfortable Ladies bike which allows my feet to touch the ground with minimum effort, and my small hands can rest on break handles without extending my fingers.  I don’t feel motivated to go shopping right away though.  In the meantime, I’ll ride the green bike and sweat a lot.
﻿
Posted by keiko amano at 1:14 PM

This is a good one,have fun.By the way in India we call 'Bike' to motorcycles. To this we address 'bi-cycle' or simply a 'geared' cycle.Amoli had one until last year.Now she has suzuki125cc excess.

Come to think of it, we use the word, bike, in Japanese like Indians. It's motorcycle. I thought about buying motorcycle, but I was afraid. Not afraid of riding around my neighborhood, but once I have it, I probably start to travel farther and farther. In that case, I better buy a car.

Keiko, Your new bike sounds great. I like the white basket. I hope you are OK after your fall. I think my mountain bike is also 21 speed. I haven’t rode it in at least two years. I miss it, but I have not been motivated and it’s parked outside the apartment, tied to a fence, with two flat tires and lots of dust. Poor bike. I need to take it to get a wash. When I did ride it, I never used all the gears. I find a comfortable gear on flat roads where my legs are not trying to hard and it’s not too easy. It’s always good to gear from the hard gears to the low gears when you’ve got speed and not on a hill. I’ve seen lots of people try it when they just begin up hill or are going too slow and either the bike stops or it starts making those crunching sounds in the gears. I also once saw a lady react very nervously and she tried to avoid a dog on the trail and she squeezed her front and back breaks really hard and she and her whole bike flipped over. She was OK, but boy was she mad at the lady who had her dog off the leash. She gave her a good yelling.

I’m hope you have more fun on your new bike. :)

So far, I got a bit scrapes at my elbow and knee, just enough to make myself more alert. It's good for me in a way. I certainly don't feel as comfortable as I used to ride when I was a child, but I can tell this is great exercise for my health. I sweat a lot when I reach home, I pay attention all around me at all time, and I use the muscles I don't usually use much.

About gear, I wrote a blog, "Low and High Gear." I was confused, and I noticed it in your sentence also. So, I wanted to make my confusion clear. You wrote, "It’s always good to gear from the hard gears to the low gears when you’ve got speed and not on a hill." I can tell you know how to change gears from this sentence, besides, otherwise, you wouldn't have rided for two years! But I think your words "the hard gears" are in fact low gears, and your "the low gears" are actually the high gears. I know it is confusing, but I want to make sure that you and someone else who were unaware of it be aware.

About your bike, that's what happened to my previous bike. I didn't ride for a long time, so I didn't think I would want to ride again. It's been fun.

Keiko, Thank you for clarifying the gears. I did always get the names confused.

I’ve been planning very soon to get my bike to the shop for repair and tune up. You’ve inspired me to get it done sooner. Thank you!

Great, Rebb! Please blog all about your bike and riding it!