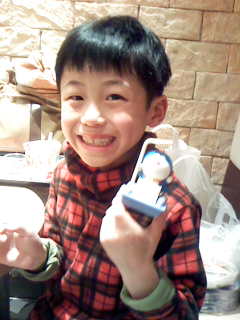 I took these photos before March 11th.   Above photo, I was at McDonald's, and this boy was playing with his Doraemon character that came with his Happy Meal.  That character in the photo moves around in a neat way.  I wanted the same toy.

For my grandson, I mean.  I told the boy's parents how wonderfully active and talkative he was.  He kept moving and talking.  He didn't stop.  So, I asked him if I gave him money could he buy me one Happy Meal for my grandson.  He said yes.

The gift came with the meal was worth the money.  The boy probably didn't need any more burger or apple juice, but I gave him those and kept the Doraemon.  He was happy, and I was happy.   We had fun. 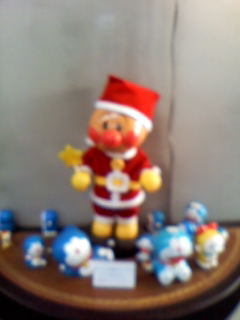 For a long time, I've been aware of a collectible toy store at the foot of the library I go often.  After I got that Doraemon above, I went into the store and asked the owner if he had the similar toys.  My grandson loves small toys that move.  He is fascinated with my plastic toy frog every time he comes to see me.  I want more of those toys to keep him occupy.   They are simple toys, but I never found them in the toy stores I had visited. 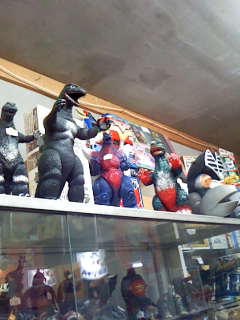 My son used to own similar toys as above, and I used to have a godzzila in my cubicle at work. 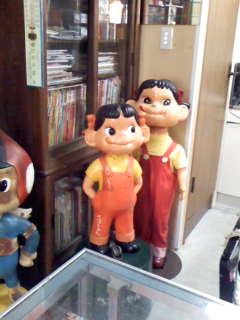 Peko chan
Posted by keiko amano at 5:24 AM

Nice toys and very nice story by too nice woman.

Thank you, Jitu. I'm glad you stopped by.

I remember having a Godzilla at home.

It reminded me when and who gave it to you. It was during your first trip to Japan. I think my cousin's son gave it to you. I wrote it in my new blog, "Reply to Luciana." It seemed I liked that toy more than you did. Godzilla was hansom.