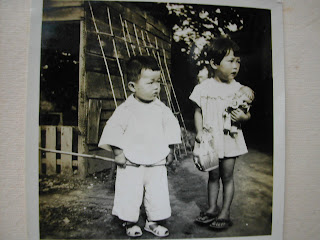 I hope the spill into the ocean stop immediately. I feel sick thinking how it is making people all over the world feel. It is also so sad that the effort Japanese have been putting into recycling, caring for their health, and living longer could be nullify by this single event. I hope people in the northeast can soon settle down in reasonably comfortable places and be able to open their large windows without worry.


It’s been 20 days since 3/11. Some communities near the nuclear plant have moved away together from multiple nearby shelters to another shelter outside their prefecture. They plan to stay together as a community even though they cannot go back. Togetherness is preferable, Japanese experts say. If your town were devastated right now, would you move together with your neighbors?

When I started to write this earthquake series, Julia had asked me to write about my neighborhood. The photo is one of my neighbor and me in front of a shed in my garden. He still lives in the same house where he was born with his mother. Last year while we were talking over the fence, I told him I like his house. In response, he twisted his nose. To me, he is one of the lucky people, but unfortunately, most Japanese have not shared the same sentiment as I have. Most Japanese have rebuilt their houses, and their original authentic wooden houses with verandahs and large windows are almost all gone from Yokohama. Our old houses are rare nowadays. I love old Japanese houses.

So, the houses around my neighborhood have changed over the years, but my neighbors have remained the same. They are my childhood friends. Some married, some didn’t, and some live with their siblings or parents. But we no longer make visits to each other unless we have a common problem. The end of last year, we had one such occasion. Our land owner changed. It could lead to problems. So, I made calls all over, and we got together and shared information. That was a good thing.

Otherwise, our neighbors and I only greet if we happen to meet. I chat a little with a few when I see them while shopping or passing by. So, I thought about what we would do if a disaster struck our community. I don’t think we would gather like the northeast people and want to establish the same community. I think the northeast is much more together than the people in Yokohama. Our team spirit may have deteriorated.

But being tightly together has demerit. Asahi newspaper on March 27 reported on the first page about the issue. Under a subtitle “Cannot abandon and leave,” I’ll translate the body. A bus is scheduled to leave from Ootuki High School in Ootuki town. Oguni Kanako, a barber in the town, entered the bus with her children. She said,

The man in charge of a 300-member shelter in Kamaishi said, “I can’t go leaving my colleagues and friends and go to an inn.” He said one member was leaving from his shelter to get to an inn. The member said to him or her before leaving,

“When I come back to clean my house, please let me stay at the shelter again.”

“Abandoning us and wanting to come back as she pleases, I don’t get it,” the man in charge said.

There were only few who went away from the shelter. This must be tough for those people. Being a member of a tightly knitted community has merit and demerit. The kind of patience my American born daughter would probably never possess would be exactly the cause of their strong teamwork. Readers probably understand it, so I say no more.
Posted by keiko amano at 3:10 AM

The news from Japan continues to sadden but I hope that in the long run some good will come out of this. Already it seems it is bringing the best out of many persons and I am certain when this experience is over the Japanese people will be stronger to be the leaders of Asian culture.

It is nice that your neighbors are known persons. In cities neighbors do not interact much nowadays but in some neighborhoods they have made groups of twelve homes so that a party is organised in one home once every month on last sunday of month by rotation by that home owner - a party to which all bring some food, deserts or drink too. The month is fixed for everyone in advance for all time but persons can exchange their month with others if need be.

Thank you. I already see many good things coming out of this huge incident. Every time I hear or see the people in one of underdevelped nations trying to contribute to the northeast people, it makes me cry. When Japan was poor, we had that strong feeling toward people. Nowadays, in the cities, we no longer interact much among neighbors. We can't go back to the way it was, but I miss it. When the nation was poor, something in us was richer than now.

About my neighbors, one drives me crazy which I have written on my blog. I don't interact with them because we don't share same interest, but I feel secure. I also feel secure in San Dimas, California, too. Almost all my neighbors there have been there for a long time, and I know them.

Long ago, I used to cook often and invited people, but I hardly do that now. Now, I do only minimum of housework and cooking. I think I need to cook more in order to socialize more. Do you cook a lot?

About clean up of the plant, it will take many years like 20 or more years, I'm afraid, because it isn't a normal shutdown. It costs enormous amount of money, and so many businesses are affected.

I too do not cook much. I have a boy Shyamu, He or his wife help with the cooking most times but I have to do it when they travel to their village which is several times a year for a couple of weeks each time.

I think if people become rich or poor beyond a certain point some good human qualities are lost and it is best somewhere in the middle, neither poor nor rich in my experience.

If we cook three times a day, preparing, cooking and cleaning will take up all our time and energy, but we should take time to eat good meals. That's why I don't cook much anymore, and that's my excuse also.

About somewhere in the middle, I agree. I'm sure most of us agree with that.