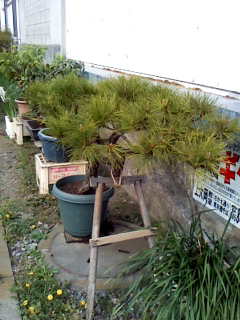 Conflicts continue here. Please see this amazing photo below. It is the only pine tree remained at Takadamatsubara, a picturesque spot in Rikuzentakata City in Iwate prefecture. A few days ago, I read that about 70,000 pine trees used to grow there.
http://www.yomiuri.co.jp/zoom/20110324-OYT9I00904.htm

Another beautiful spot for pine trees is Matsushima. At the seaside there, we can see many small islands covered with pine trees. It’s in Matsushima town in Miyagi prefecture.
http://www.town.matsushima.miyagi.jp/

In early 90s, I met a Japanese friend of mine at Los Angeles airport and travelled together on Korean Air to Japan. She was on the way to her home, Sendai city in Miyagi prefecture. I was on the way back to Yokohama. I told her I had never been to the northeastern Japan. She invited me to her birth home. Her house was at the foot of the former Aoba Castle. I couldn’t resist such offer, so I joined her and her family a few days later to a hot spring in Zaoh, a ski resort, and then she and I took a short trip to Matsushima next day. We had fresh oysters for lunch and watched many small islands covered with dark green pine-trees in a distance. The scenery was just like in fairy tales, photos and old paintings I had read and seen.

I haven’t seen the friend for a long time, but because of the disaster, I sent an email to our mutual friend and asked about her and her family. I received her email and confirmed that they were all well, but her college classmates lost their homes in the tsunami. I was glad and sorry about the news.

I wondered what happened to the picturesque Matsushima town. Its view is very important cultural property. It shows up often in old and current literature. Yesterday, I learned that those islands are still there, and maybe some are damaged, but they still have pine trees in Matsushima town. But 500 out of 1000 evacuees need new homes, and they cannot build where they used to live. They have to find their home in higher ground where many pine trees are standing. With prefabricated housing in mind, the reporter asked an authority which was more important, pine trees or people.

The authority replied, people. That makes sense. Now, do you think the authority will decide and cut those trees to build prefabricated houses for those 500 people? Stay tune. When I hear further news on this issue, I’ll let you know.
Posted by keiko amano at 3:39 AM

Keiko, i conside the pine tree as one of the most beautiful ones on our planet. It is a great tragedy to lose somany trees and homes. I guess the rebuilding of homes must come first and then the replanting of trees.

I hope the planners are sitting together to replan the rebuilding. It might be more appropriate to shift some of the towns to higher grounds and clear the earlier areas for replanting of trees or farming. All that will need very careful national level planning.

Yes, the president of National Defense Academy was appointed to head a project to create a new and better city in Fukushima. He was involved in Kobe Earthquake recovery. He himself lost his home in that disaster. Also, a famous architect named Ando was appointed to be a member of that new project, too. I have problems with some of his ideas. Once he created an island-like structure in the ocean and created a garden and grow trees there. I'm against modifying the coast and ocean. They've done enough to kill marine life. If we need more land, the government should encourage people to move outside of Tokyo and Yokohama area. We have enough land in Hokkaido and other regions. Just like the nuclear reactors problem, no goverment ever tried to deal with that over-crowded problem of Tokyo area. Worse is that the governor of Tokyo and that architect want an olympic to come to Tokyo. They tried to win the votes from Brazil last time. I could not believe what they were doing. That's greed, and no consideration to under-developed nations.

One of the candidate lands, they found 100 people or so are the owners. The town or city employees have to call each ower and buy the right from them one by one. Can you imagine how tedious the process is? That's why it's been slow to build prefabricated houses.

This was email from D. I cut and past it here.

Oh, can't the people live among the pine trees? sigh

Your angle is one not covered in any news story I've read.
Past and present, I mean.

Actually, someone suggested to build houses and covered by pine trees so that tourists cannot see.
The person who suggested does not have enough imagination. An excellent pine tree forest is sparse, not dense. The person might have other ideas, but anything unnatural is bad idea in my opinion. I'll follow up on this issue because I'm interested in the outcome.

Thank you for reading my blog and your comment.